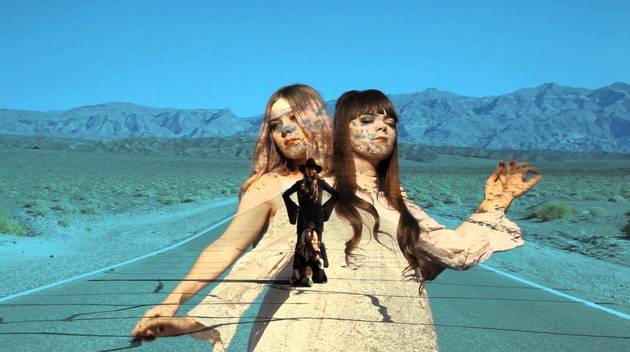 In one respect, it’s an even tougher year than normal to make it as a critical darling in the independent country/Americana sphere with so much attention and kudos being sucked up and deservedly so by Sturgill Simpson. It’s like Jordan’s stellar career overshadowed the fact that Charles Barkley was one of the greatest to ever play the game. Here First Aid Kit is putting out the best album of their career in Stay Gold, one of the best albums of 2014, and also enjoying a meteoric and worthy rise, selling out theaters on their current US tour with Samantha Crain, and wooing critics and crowds left and right. Their 2014 success story is one not to overlook, and their music is something not to go unheard.

Something that First Aid Kit has that virtually no other artist or band in the independent roots realm of a similar or bigger size can match is a library of videos that dazzle, entertain, and incite wonder like little else you can find. It’s an attention to video making as a creative medium in itself with no boundaries that gives their music an extra special love. The release of a new First Aid Kit video is grounds for an immediate stop down, and not just their tightly-woven and intricate big-production music videos with multiple scenes and settings that cast the duo in regal and awe-inducing moments, but with the sincerity and talent this sister duo from Sweden displays, even a short acoustic performance in a publishing office or a covered wayside is something that can enthrall and shuttle you off into a wormhole of escapism. After all, it was a simple video of the duo singing a Fleet Foxes cover that is given credit for launching their career.

As an offering for Record Store Day’s upcoming Black Friday releases, Johanna and Klara Söderberg have covered Simon & Garfunkel’s iconic tune “America,” written by Paul Simon. A master work of the American songbook, the song peerlessly encapsulates the forlorn beauty of youthful restlessness and underlying abject fear that are an indelible part of the American experience. Deciding to cover a song such as this takes guts beyond mention, like tackling “Unchained Melody” or some other such tall order that holds such a mystique behind it, the ramifications are costly if one can’t handle the composition’s heavy demands.

It’s not just happenstance that the sisters decided to go with the song as the anchor of their 10″ Record Store Day release. In 2012 while performing at the Polar Music Prize, their “America” rendition backed by a full symphony sent the crowd reeling, and won them a standing ovation from Paul Simon himself who happened to be in attendance as the guest of honor (watch). Once again the sister duo had captured a singular moment on video.

The studio version of “America” finds First Aid Kit taking minimal creative license with the song, and instead focusing on trying to conjure up the original awe-inducing moments in an new rendition. The close harmonies that make the sisters the closest thing we have to the lineage of The Carter Family fit smartly within the song, and the duty of the final high-register harmonies is not shirked for a more manageable feat, but reached for and achieved so that the shivers the song can afford spring from the epidermis in full bloom. Only the original can best this version.

First Aid Kit elects to go with a more folksy and understated video presentation for the cover song, intermixing vintage footage with shots of their American tours, and snippets of the sisters performing the song at various stops, making for a cozy experience. “America” shows First Aid Kit’s prowess as singers and tasteful interpreters, and must be considered one of the marquee offerings for Record Store Day’s Black Friday event.