Jamey Johnson’s “Living for a Song / Tribute to Hank Cochran”

How important was Hank Cochran as a songwriter? I’ll let Willie Nelson tell you.

Jamey Johnson’s Living For a Song is a tribute to his musical hero; a man he met in 2008 when Cochran was already suffering from pancreatic cancer. Johnson would visit Cochran regularly in the hospital, and according to Hank’s widow Suzy, “Jamey was there when a lot of people weren’t coming around.” Hank Cochran died on July 15th, 2010. Cochran’s death is said to inspire this project.

I’ve always had great respect for Jamey Johnson the man, and his dedication and desire to see this project through elevates him yet another notch. It’s hard not to regard him as one of the most sincere and authentic men in country music today, and the hope is that this project will elevate the name recognition of one of country’s greatest songwriters.

And you will find no more critically-acclaimed performer in country music at the moment, or in the last half-decade than Jamey Johnson. And though I appreciate Jamey the person and his honest, traditional approach to the music, in both the recorded and live context, I’ve found his music to be fundamentally lacking energy, enthusiasm, or the ability to engage the ear in virtually any manner. And unfortunately, Living for a Song falls into that same category.

This is what I don’t get about this album: We are sold this idea that Jamey Johnson is the best songwriter of our generation. But here it is over two years after his last album release, and this superlative, prolific songwriter is putting out an album of someone elses songs. Granted, his last album The Guitar Song was a double album, but like I pointed out when the The Guitar Song was released, there was a curious amount of covers and co-writes there as well. 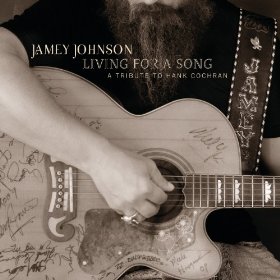 I understand this is a tribute album, but most tribute albums are side projects; something you do outside of your normal album cycle as an artist. Living for a Song however is Jamey Johnson’s newest major release in his country music career. Can anybody tell me what other hits or critically-acclaimed songs Jamey Johnson has written for other artists since The Guitar Song’s release? What I’m getting at here is I think our generation’s best and most-prolific songwriter is in the midst of a multi-year writers block. That’s the only explanation I can come up for releasing this album as his sole recorded contribution to music in the last two years, aside from some guest spots.

What is Jamey Johnson known as? As a performer? As a singer? No. He might be capable at these two tasks, but he’s known primarily as a songwriter. So how am I supposed to get excited about him singing songs written and popularized by someone else? Do we really think he can sing “I Fall To Pieces” better than Patsy Cline? Is what we really need in a demonstratively-glutted music world milder versions of songs we’ve already heard?

And for all the Jamey Johnson fans who sell him as the solution to how to get folks re-engaged with traditional country, how does this album do the trick? Are any of these songs radio singles that can compete with Taylor Swift? They’re songs that will make the kiddos put their hands over their mouths in the universal sign of sleepy time. Jamey Johnson is like the country music sedative. His super power is the ability to make any country music song boring. He’s the exact reason fans of Brantley Gilbert and Colt Ford say country needs to evolve. And in this instance, they are right.

What is the cliche about good cover songs? That the covering artist “made it their own.” At no time on Living for a Song does it feel like Jamey Johnson makes a song his own. Granted, these songs are country. They’re very country. They’re so country, they’re cliche. But just because something is country doesn’t mean it’s good. As I have said about other Jamey Johnson projects, I believe that people are so used to hearing country that doesn’t sound like country, when someone actually plays country music they’re charmed into thinking it’s superb.

If this was a side project cover album, such criticism may not be appropriate. But this album is being so ballyhooed by critics all over the place that it creates the need for a little perspective. Even when looking at Living for a Song as a tribute and a tribute only, the album feels way too busy. It makes the same mistake Willie Nelson’s last album Heroes does of having too many guests. And may I point out that both albums were produced by Buddy Cannon. Like I said about Heroes:

Where the album may come across as too busy or unfocused is the amount of contributors to each composition, and to the album as a whole…Sure, many of these names we love, but there’s too many of them, diverting focus from any one pairing or performance.

It’s difficult to focus on Hank Cochran’s songwriting–the purpose of this album–because the people singing switch back and forth so often. Every song but one is a duet, and one song has three singers, one four singers, and one five. Some songs feel mere steps away from “We are the World”.

Willie, Merle, Emmylou, Kristofferson, Bobby Bare and others, these are all great names and I don’t doubt for a second the love for Hank Cochran all the Living for a Song contributors have. But the music is diminished by the sheer number of contributions. For Jamey, this may be a sincere tribute, but to the label, it feels similar to the Hank Williams Lost Notebooks project, like an excuse to showcase talent and shovel money towards Sony/ATV who owns the publishing on these songs.

Aside from the excessive singing parts, there’s nothing wrong with this album. But there’s nothing right either. All the musicians and singers do excellent jobs. The issue is with the approach.

God bless Jamey Johnson for putting together a heartfelt tribute to a country great that has passed on. But Living for a Song is about as lifeless as traditional country music gets. If you want to listen to a great classic country album released in 2012, listen to Don Williams’ And So It Goes. It resides in the same tempo, but brings a uniqueness and a soul that Living for a Song lacks. Or even better, go listen to Hank Cochran’s originals, or the original songs others made hits. These do a better job at selling Cochran’s legacy than this.

If Jamey Johnson wasn’t sold to us so hard, I might begin to appreciate his music on some level. But shoot me that I like my pulse raised when I put on an album.

1 gun up for a beautiful tribute to a fallen country great.

1 gun down for an album that is too busy, overproduced, and downright boring.

Preview & Purchase Tracks from Living for a Song