This might be the hardest album review I’ve ever sat down to write. Normally I would not compose, and certainly not publish a review until I felt I had a firm determination on a project, but when it comes to Justin Townes Earle‘s Nothing’s Gonna Change The Way You Feel About Me Now, I have a sense that coming to that determination may take a time period longer than its garrulous title, maybe not until I see the material live, or maybe not until his next album is put out and it can be viewed in a greater context. It may be years from now.

And to further complicate the situation is my own confounding and bi-polar perspective on the man and his music. His last album Harlem River Blues had me fighting against the grain of positivity, calling out his sobriety as the culprit for gathering together a selection of songs sans his signature soul; a theory that was validated in part three weeks later when Earle ended a gig being detained by Indianapolis’s finest in a scenario that is serenaded on this album’s final track. And then last year I named him my Artist of the Year, based mostly on a live performance technically from the year before, and a new found sobriety that according to Justin included some serious relapses.

For all intents and purposes, Justin Townes Earle has “made it” in as much as any musician can in the modern era of music, and this usually endows the artist with the latitude to do just about whatever they want sonically, and JTE decided to give a “Memphis feel” (his words) to his newest endeavor. I hear Memphis here, but I also hear just as much early Motown. When you think “Memphis”, don’t think Sun Studios, Cash and Elvis so much as a bluesy, black soul vibe brought forth by horn sections and such. 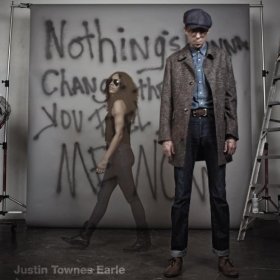 Don’t call this a concept album, but except for maybe the final two songs, the “Memphis” production approach is very steadfast throughout. Some of the songs it compliments quite well. Some it seems to get in the way of. Some of the songs seem to be built solely to convey the Memphis soul, like “Baby’s Got A Bad Idea” and “Memphis In The Rain”.

There is not a bad song on this album. We see JTE return to the honest, heavy-hearted songwriting that has become his signature. Though this album is hard to warm up to. JTE’s voice may come across as unusual at first, maybe even weak, and the production may seem out-of-place or even droning because it is such an unusual approach for him, or any artist originating out of the Americana world. But when you give it time, it all starts to work. I think time will be a great ally of this album, just as much as the short-term may be a hindrance.

“Maria” is the first of the stellar songs of the album, and where the Memphis approach and Earle’s songwriting create a gorgeous confluence of style and soul and storytelling. The way the void of the lyric-less chorus is filled by a progression of tasteful guitar, then horns, then keys, and the way the song ends so abruptly and unresolved, with the name of a woman like salt on Earle’s lips gives the song a flawless construct and unobstructed bore straight to the listener’s heart.

Two songs seem to bench the Memphis vibe in lieu of just fiercely giving the song whatever it calls for, which turns out to be a pretty bare bones approach to let Earle’s mastery of lyric breathe in space. The sad, blinding self-awareness of “It Won’t Be The Last Time”, and the sad awareness of another in “Unfortunately, Anna” make whatever sounds audible to the human ear offered up to compliment the stories nearly superfluous. “It Won’t Be The Last Time” is the last song on the album, but the first one Justin wrote for it, and the first after his rehab stint. An audible hiss on the recording and the presence of steel guitar also helps delineate “It Won’t Be The Last Time” from the other songs in production and mood.

The “Memphis” production approach works, and works well at times, but I wonder what the need is to marry any song to any era or place, instead of letting a song choose a time and place itself? I’ve never though of Justin Townes Earle as an entertainer. He’s a songwriter, and then maybe a performer after that, and attempting to pull off songs like “Baby’s Got A Bad Idea” and “Look The Other Way” seemed to stretch his skill set, though “Look The Other Way” you can look past to see his signature songwriting style still there. Slow soul is JTE’s wheelhouse. Sometimes you need to change the pace to keep an album spicy, but you never need to stray too far from your strengths.

And again, I can’t stress enough that this album’s best days, or years may be in the future. Like the Rolling Stone’s Exile on Main Street, or The Beastie Boys Paul’s Boutique, Nothing’s Gonna Change‘s genius might take time to reveal itself. What I do feel confident in saying is that this is the album Justin Townes Earle wanted to make, and that it’s good. And let’s not forget to give him credit for being bold with this approach and release. He could have made just another album. Instead, he made this one. Maybe a little rushed, but it’s true to itself, and I stand steadfast behind my theory that Justin Townes Earle’s best work is done sober, like this album was.

After giving it much consideration and seeing Justin Townes Earle perform this material live, I have decided to change the grade on this review as I gave myself the option of doing up above. Though I still have some concerns that the “Memphis” approach hindered some songs, the strength of Nothing’s Gonna Change‘s other tracks, some of which I consider some of the best of the year so far, merit this album being considered in the top tier.