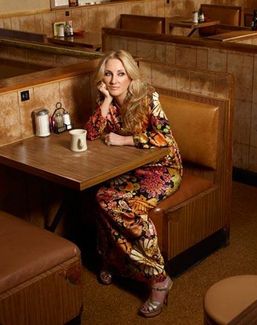 When Lee Ann Womack set out to construct her 2014 album The Way I’m Livin’, she went looking for songs that weren’t written by committee as is the norm in Nashville these days, but songs that originated from one person going through a human experience who then shared that experience through song. Such a search if it was to be thorough and prudent would almost invariably involve Chris Knight, who though maybe not a name familiar to the teeming masses, is like a golden goose amidst the right songwriting circles, and amongst his many loyal independent fans who know him as a songwriter who can take the most simple sentiments and make them sound like Shakespeare.

The songwriters Womack selected for The Way I’m Livin’ are one of the album’s most endearing assets, shining little spotlights on the likes of Hayes Carll, Adam Hood, Brennen Leigh, and Mando Saenz. “Send It On Down,” which has been selected as the second single from the album, was written by Chris Knight with David Leone, who’s been writing with Knight for years. Peering through to the bones of the song, there’s a few ways it could have gone. But the place Lee Ann and husband/producer Frank Liddell took it was exactly where it needed to be.

Sparse, intimate, personal, and touching, “Send It On Down” in some ways is the counterbalance to the more energetic and verbose “The Way I’m Livin’.” Piano and steel guitar make up the song’s musical fabric, allowing the resonance to not fill the vacuum, but expand its desolate borders until the lonesomeness in the lyric becomes overbearing on the listener. Though the song feels like Gospel in stretches with a prayer to up above to be saved, interwoven is a very earthen narrative about someone trying to escape a ‘”own,” though you get a sense the allusions and attributions in this song are strong enough that one should be discouraged from strict literal interpretations.

This is what Chris Knight does: he delivers the most complex thoughts in the most sedated and folksy manner, and Lee Ann’s voice is the ideal vessel in this instance to deliver that sentiment.

Lee Ann Womack continues to present an interesting case study in the shift to paying greater attention to artists whose heyday was struck in years past, but still can offer unbelievable musical riches if only given a chance. The song “The Way I’m Livin'” found play on Cumulus Media’s new radio format NASH Icon as one of the very first new songs from an artist of an older era that the format professes to want to champion, and of all people Clear Channel mega DJ Bobby Bones has gotten behind “Send It On Down.” But Lee Ann appears to not be worried if the radio plays her music or not. She’s been there already, and now she simply wants to make music that fulfills the desires of her own personal playlist. If folks want to listen along, all the better. And if those folks were smart and “Send It On Down” is any indication, they should listen intently.