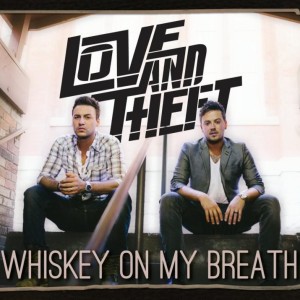 To be perfectly honest, Love & Theft was never a duo I felt much need to pay attention to. They were sort of in this gaggle of acts with two-word names like Thompson Square and Steel Magnolia, sporting middling careers with middling songs. It was just tough for them to raise the pulse, positively or negatively.

Earlier this year, the news came out about Love & Theft really getting the shaft from their RCA label in Nashville. The story was they got dropped because they weren’t Bro-Country. They were told that in as many words. And even worse, it happened when they had masters sitting on a shelf with the label, so they were left in a lurch like so many major label acts are when the ax falls. RCA Nashville was one of the many labels under Sony Nashville CEO Gary Overton’s control—the guy that uttered the now notorious words about not existing if you’re not on radio. Overton has since lost his own job.

So Love & Theft regrouped and decided to strip down their sound to mostly acoustics and record a new album called Whiskey On My Breath. With song titles such as “Hang Out Hungover” and “Tan Lines,” you can probably anticipate some of the flavors this album includes. A few of the songs probably could be characterized as stripped-down versions of Bro-Country in some respects, but others show much more promise. The title track especially caught my ear.

The very beginning is where the song can almost lose you. It’s just a little too progressive, a little too stylized for my taste. Hand drums are not exactly what I have in mind when I think of a weighty country song. But then it settles in just fine and you virtually forget about all that by the first chorus.

Co-written by Stephen Barker Liles and Eric Gunderson of Love and Theft with Trent Tomlinson, Russell Dickerson, Adam Craig and Mark McGuinn, the song takes almost the exact opposite approach of the modern day country song by instead of glorifying the party lifestyle, representing the other side of the coin in more of a cautionary tale. It’s fair to call it a religious song, but the contriteness and real life narrative grounds “Whiskey In My Breath” in more of a universally-resonating sentiment, impacting the listener no matter what their religious affiliation happens to be.

One of the many unfortunate parts about the modern day Nashville machine is that you never know how truly talented (or not talented) the artists are once layer upon layer of production has been added on top. By peeling that all back and exposing their voices, Love & Theft soar in a way virtually unseen from major label acts these days aside from maybe Carrie Underwood. “Whiskey On My Breath” reminded me a lot of Underwood’s “Something In The Water,” and Vince Gill’s “Go Rest High On That Mountain” especially. No wonder after the duo performed the song on the Grand Ole Opry, Gill said to them as they walked off stage, “That’s how you sing boys.”

As you could probably anticipate, despite being released as a single, “Whiskey On My Breath” didn’t raise a blip of interest on country radio without a major label behind its back. But the hook is chilling, the sentiment is pure, and it’s definitely something worth bending an ear to.