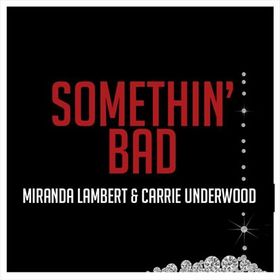 “I got a real good feeling something bad’s about to happen” is the lyrical hook of Miranda Lambert and Carrie Underwood’s much-anticipated duet “Something Bad” which is set to appear on Miranda’s new album Platinum, and was just released as a single. And when the duo debuted the song on the 2014 Billboard Music Awards Sunday night, something bad did happen.

Much talk and hand-wringing had preceded this collaboration in the weeks after it was announced, and in the weeks leading up to its debut on the Billboard Awards. But the performance had many fans of both artists wondering just what the hell they were seeing and hearing transpire on the MGM Stage in Las Vegas. Ahead of the performance, some were calling this collaboration historic, legendary, and overdue. The idea was that the current dominant style of music known as “bro-country” had so corrupted country music’s airwaves and relegated virtually all country female performers to a lower class, it needed an antidote, a power-packed one-two punch of country music female stardom that could show the boys that the women of country mean business. But instead we got flailing hair, screamed lyrics, and a loss of melody that made the song and performance smack of some 80’s era mashup between Aerosmith and Joan Jett.

Miranda Lambert & Carrie Underwood to Battle Bro-Country with “Something Bad”

In lieu of the duo battling bro-country with the brawn of their sheer star talent and doing what they do best, which is wowing audiences with singing prowess and powerful lyricism, Carrie and Miranda stole plays straight out of the bro-country coloring book and descended into vapid and story-less rhythmic superfluousness complete with unnecessary gesticulations and other showy nonsense that illustrated how amateurish and under-practiced they are at being really bad. 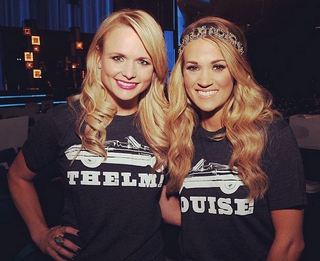 “Something Bad” is buoyed by a fun-enough and catchy “wo-ow-ow” chant that garnered some sympathy clapping from the Billboard Awards crowd and will certainly earn the studio version a few fans, but the machine-gun, pseudo-rapped Aerosmith-esque verses were anemic from their lack of substantive material. The song has a goodly amount of awkward, empty space in the middle of it for some reason, and even if all the elegance hadn’t been drained from the vocals, the key chosen and the style of the song in no way complimented either lady’s natural strengths, and made the tone and character of their performances virtually interchangeable.

With “Something Bad” it is a scenario where two big sums equal something much less than their individual parts. In fact the song offers the scary prospect that in the face of continued low-performing results from country music’s women, they will be forced to not only cross genres like is done in this rock-like and rap-like mono-genre mess, but also cross chromosome lines and start having to ape the boy’s adolescent behavior to buy attention. “Something Bad” felt like when the sweet girl next door tries to play the slut to land her beau, and smears the lipstick and stumbles in her high heels. Sure, Carrie and Miranda looked ravishing, but it was hiding a really, really bad hair day.

The studio version reveals a little more production value, but just about the same level of disappointment.

You’ll get ’em next time girls. But this one was more rough than a peanut patty goober side up.