If you want proof that in 2012 genuine old-fashioned rock n’ roll is indeed roots music, look no further than Nick Curran & The Lowlifes and the album Reform School Girl.

Unfortunately Nick Curran passed away on Saturday (10-6-12) after a long fight with oral cancer. He was originally diagnosed in 2010 and was said to be free of the disease by June. Then in April of 2011 the cancer came back, and has now claimed a great guitar player, singer, and rock n’ roll composer. But what Nick left behind was a revitalization of the true soul of rock & roll.

Reform School Girl is one of the funnest albums you could ever get your hands on. I mean this stuff is like Viagra; it shouldn’t be consumed unless your heart is healthy enough for strenuous activity because your head is going to be bopping, your hips are going to be hunching, and you will be making a damn fool of yourself like you were a little kid dancing around your living room. This is the most raw, primal version of rock n’ roll the human ear can handle.

What raises Reform School Girl from “fun” to “iconic” though is the the level of dedication Nick Curran brought to authentically re-creating the feel of rock n’ roll from the 50’s. Some will complain that Curran completely ripped off certain elements, like the drum intro on the title track “Reform School Girl” and how it sounds very similar to “Be My Baby” by the Ronettes. 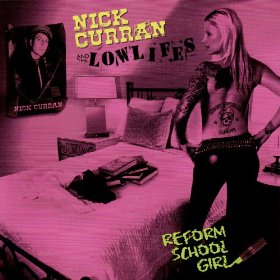 But this is what you need to understand: There’s albums all over the place right now that are trying to re-create the vintage vibe in one capacity or another. And they may get one element right, maybe the tone of the vocals, or the style of the music. But the fantasy is most often compromised by something: Cuss words or other anachronistic language that don’t fit the time, a style or tone that wasn’t around in the 50’s, or the recording is only partially done with vintage flair or feel.

Reform School Girl however is the full package. Nick Curran was painstakingly dedicated to making this album authentic through and through to the 50’s era. From the tone, to the style, to the energy, to the licks and lyrics, to the recording equipment and the recording technique, you can go through this album and not find one single element that isn’t indigenous to the 1950’s era, and by doing so, Curran awakens that inherent yearning embedded in all of us to transport back to that time and feel the warmth, positivity, and coolness that permeated that period in America.

This is the legacy of Nick Curran, along with his enthusiasm and his amazing guitar licks. From his debut album Fixin’ Your Head in 1999, Curran was able to take you back to a better place and time. He was the time travel agent for those old souls born in the wrong era.

Rest In Peace Nick Curran, you done good. You made life down here a little happier, but apparently Heaven needs a rock n’ roll revitalization too.