If your looking for that one bluegrass ensemble that is defining our generation’s take on the discipline, it’s hard to argue against the Punch Brothers. Though Punch Brothers talk usually trends toward the talent of mandolin maestro Chris Thile, the troupe boasts overarching, rabidly accomplished skill across the front line, and a far superior instrumental adeptness that is undeniable.

Though you can’t take the word “bluegrass” too literally when applying it here. The Punch Brothers are just as likely to do a suite in four movements as they are a old-time breakdown. With this much talent, it’s no wonder the modern classical world would just as much like to name the Punch Brothers to their ranks as bluegrass would, and when listening to Who’s Felling Young Now, it’s hard to say they don’t fit in both. 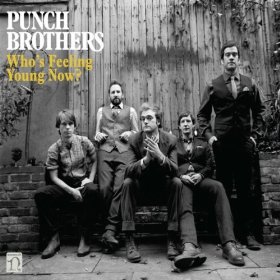 This music is fiercely progressive, very little Bill Monroe, but not quite to Bela Fleck either. If anything, the most fair comparison to the music on this album is to Radiohead, and no, this is not just an easy conclusion to come to when you see they covered Radiohead’s “Kid A” here. Without even looking at the track list, from the start of the first song “Movement and Location”, the heavy handed Thom Yorke influence is easily spied, in the song’s mechanics and how the vocals rise to falsetto in the phrases.

I’ve said over the years that Radiohead is one of the most influential bands of our time. This is not necessarily an endorsement; more of an observation. Radiohead’s influence here is such that I couldn’t argue if someone wanted to question the Punch Brothers’ originality as strange as that may seem to say. Strange, but it’s also a conclusion that’s hard to shake on repeated trips through this album. And though this all might blend in quite fine to the bands “modern” motif, I feel the need to point out that Radiohead’s Kid A came out in 2000; 12 years ago for those of you counting at home. Great music is timeless, but 12-year-old music is not something you can characterize as “current.”

This music is great for observation, for sitting back and appreciating the artistry, technique, and talent, but it never really grabs you. It doesn’t feel grounded. There’s not a lot of sensibility to it, and so the music never affords a visceral experience that really allows you to get lost in it as opposed to intellectualizing it to find appreciation. At times they compose marvelous grooves, but then cut them short in favor of classicism displayed in an esoteric artistry.

Is this necessarily bad? No, not at all, but it gives Who’s Feeling Young Now? a headiness that I’m afraid will make the music’s audience less than what the brilliance of instrumentation and composition should afford.

And there are some very good songs here, and some good grounded moments. The lyrics for “This Girl”, “Patchwork Girlfriend”, and “Don’t Get Married Without Me” do breathe an accessibility into these songs that allows you to warm up to them. “Flippen (The Flip)” bucks the heady trend of the album (and is the only song except for “Kid A” not written by the band) and sparks some fun into the middle of the album right when it is needed.

In the end, I like this album. I just wish it held a few more overtly-pleasing experiences, yet not compromise on it’s artistic prowess, so that it could act as a better bridge between the traditional and passive bluegrass fans, and the fulfillment of listening to five maestros heaving at the height of their craft.