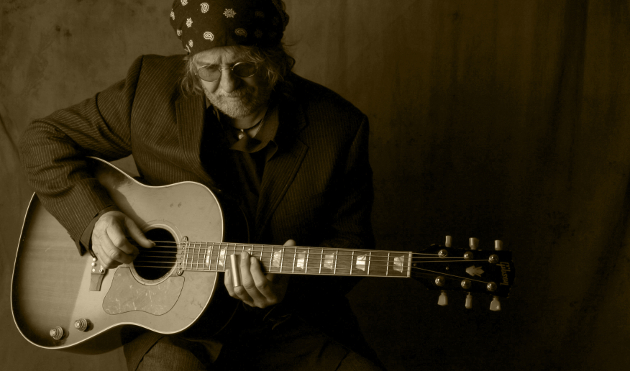 What a mess this album is, like it was made by a bunch of stinky, sweaty, dried out alcohol bums dolted by delirium tremens, who camped out in a makeshift shack for a studio, using busted gear, bad hand-me-down microphones failing to sweeten the worn-out drones of old strings and second hand skins played a tick off beat, barely adhering to the rules of intonation, and completely out of touch with anything resembling today’s relevant styles.

Just the singer himself sounds like he should have cut his losses a quarter century ago and found a profession that better suited him. Actually strike that, I’m not sure he ever had the true capacity to sing pleasantly for the edification of the human ear. His grumbles and moans sound like air being forced through a set of torn and tired bellows clamoring to be retired.

…and these and other reasons are why Ray Wylie Hubbard is so beloved, why he’s so uniquely qualified to capture the low down no good side of life, and can make dusty moans and downtrodden tunes sound like divine harmony.

Ray Wylie Hubbard says himself on this record that ain’t nobody in the halls of commercial enterprise looking for his style of arcane country folk blues. But that’s okay, it just means more heaping helpings for the rest of us who don’t want to partake in whatever is being served up by the evildoers programming pop culture. Ray Wylie Hubbard is just the type of stripped back, served raw, powerful and potent stuff that true roots music fans seek out.

Complain all day this music is not relevant. But there is a reason acts like Eric Church and The Cadillac Three are name dropping Ray Wylie Hubbard and asking him to share the stage with them. It’s because when you start digging deeper into the modes and styles of American music, you discover crusty old criminally-overlooked guys like Ray infer even the most popular stuff. Ray is the kind of cool everyone wants to be, but few have the cred, stories, and skins on the wall to capture. 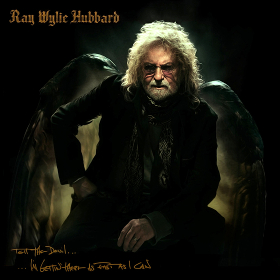 It’s a fair criticism to say that the modern incarnation of Ray Wylie Hubbard is primarily concerned with incantations about vintage musical gear and the battle between good and evil in the carnal world. He’s gone from the “Forgotten Outlaw” to a guy who would make a great tour guide through either a vintage guitar shop, or the scripts of the Old Testament. The sameness of the material may be a bit tedious for the neophyte roots music listener. But adhering to the maxim of singing about what you know about, and specializing in a discipline that fits your strengths, Ray Wylie’s determined that the dead thumb blues and the trial and tribulations of the human soul on earth are what best fit within his now 70-year-old frame.

Even folks with an elevated understanding of music couldn’t tell you what an “ES-335” or a “VOX AC-30” are, rendering some of Ray’s music as too esoteric for the common ear. But that’s part of the beauty of it. If you can’t perform for the masses, at least you can speak to those who do in a language they understand and respect.  If anything, on Tell The Devil I’m Gettin’ There As Fast As I Can, Ray Wylie Hubbard doubles down on the approach of his recent records. “God Looked Around” is a direct retelling of the story of Genesis. “Open G” is probably about the most dedicated recitation of how to tune a guitar you will hear in a song.

Ray Wylie Hubbard can get away with singing about the same subject matter because his songwriting is so damn good. The characters he creates and the scenarios he puts them in stimulate a theater of the mind and escapism of the body like few others, while still feeling like they all come in some version of events from the nine lives of Hubbard himself.

He’ll pull out a song like the ghost story “House of the White Rose Bouquet” and absolutely blow your mind. He’ll tell stories of the low down and downtrodden, and make them sound like superheroes like in “Lucifer and the Fallen Angels” and “Old Wolf.” But these songs don’t come from some strange marvel that Ray Wylie Hubbard has with the evil side of life, they shine a light on how the shades between good and evil are much more subtle than they’re given credit for, and how we’re all simply one decision away from a fall from grace, or a shot at redemption.

That’s why just like his previous two albums, Tell The Devil concludes with material much closer to hymn than accounts of hellish behavior. Hubbard’s output from the last decade is like a detailed account of events to St. Peter in hopes that his honesty and repentant stance will result in a golden ticket.

70-year-old guys without super hits on their resume are not supposed to be as revered as Ray Wylie Hubbard is by his musical peers, or just hitting their stride creatively. But that is the strange, inverted, winding road Ray Wylie Hubbard has taken to christening himself a living legend in almost universal acceptance, at least for the folks who’ve heard of him.

Eric Church, Ray Wylie Hubbard, Review, Tell The Devil I'm Getting There As Fast As I Can, The Cadillac Three