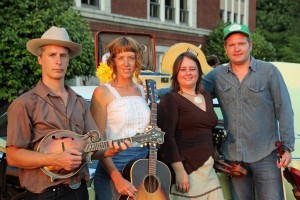 Talk about a band that deserves more due. The Foghorn Stringband has quietly become one of the country’s longest-tenured underground stringbands, releasing now 7 albums, playing thousands of shows, touring coast to coast countless times and as far ranging as Scotland to Australia.

In 2012, it’s pretty remarkable when you take a step back and realize where the string band concept has gone. Mumford & Sons, The Avett Brothers, Trampled by Turtles–these are highly-successful bands that are only slight variations on the traditional string band approach. Where Foghorn resides is in authentic interpretation. Hundreds upon hundreds of traditional string-based songs they can call upon. Where certain other string bands mix strains of punk or rock into their concept to cast themselves apart from the string band crowd, Foghorn finds variety not in mixing in contemporary art forms, but in finding new threads and variations to the same vintage-era music.

Whether it’s folk, bluegrass, country, or Cajun, Foghorn can play a breakdown, a Celtic jig, a Cajun waltz, and cut a rug to an early country tune in the span of as many songs and sell you quickly on the idea that you don’t need amplification or new school modes to make music that is both memorable and entertaining.

The other remarkable thing about Foghorn is that they’re like the silly putty of string bands. Strip them down to a duo, expanding it out to a trio or the the full four piece Stringband, rework it to be the backing band for mandolin player Caleb Klauder’s country project, or bring them in to comprise the rhythm section for the Louisiana-based Cajun Country Revival. Either way they work so well, and their willingness to follow whatever direction music presents for them is what has lent to the amazing music legacy they are forging in the minds of the people who have experienced Foghorn first hand. 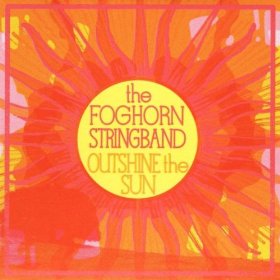 Outshine the Sun is an excellent album, and where it makes its mark is in the positivity of its message. There are many bands these days digging up old standards from The Carter Family, The Stanley Brothers and the like, but that tend to seek out the darkness in roots music; songs about muder, and preferrably cocaine if you can find them, because they feel like those themes are what keep the music relevant.

Outshine the Sun works boldly in the opposite direction, presenting the cheerful side of the roots from its formative years, in the lyrical content, and in the modes of the music, with bright, frolicking and fun compositions and instrumentals that make this a fresh approach to the roots despite the vintage age of the material. I grimaced when I saw 21 tracks on this album. I mean did they expect to hold my attention for that long? But they did, and they do by the sheer talent of the Foghorn roster, and the sincerity of their approach.

The Foghorn core has always been Caleb Klauder on mandolin, and Sammy Lind on fiddle. You can make an honest case that Caleb Klauder is the greatest undiscovered country music talent in the world, held back simply by his own humility. Sammy Lind is such a natural musician, he plays fiddle as involuntarily as most of us breathe, holding it loosely under his chin until it slides down into the cradle of his arm Cajun style, and then pushing it back up onto his shoulder to take a blistering fiddle break. The Cajun/Arcadian cross-continent nexus that Foghorn embodies is completed by Quebec native Nadine Landry on bass. It’s common to hear French sung in Foghorn, inspired from either Louisiana or north of the border. And contributing the rhythm guitar and vocals is the newest Foghorn member Rebecca “Reeb” Willms.

Reeb Willms’ contributions are what puts Outshine the Sun over the top. Her technique on guitar is so flawless, you feel compelled to pinch her to to make sure she’s human. And her voice is so powerful, yet is delivered so dry, devoid of bravado embellishments or kitschy inflections that mire so many vocal performances these days. Her projection has that awesome characteristic of rising in volume as it climbs the register, and evokes ghosts of the more Stoic era that the music comes from in her tone.

The talent in Foghorn is excellent, but not exceptional. Taste is their exceptional attribute. They’re not trying to wow you with how fast they move their fingers, they’re just trying to represent music they hold in great reverence in an honest and entertaining manner. They are true revivalists who resist chasing trends or trying to do too much, and Outshine the Sun exemplifies that honest, straightforward approach.