It would be the utmost of conceit to think that the Turnpike Troubadours are regular readers of this lowly internet outpost, and even if they were, that they’d heed any advice thrown their way by its overly-opinionated, obsessive proprietor. But I’ll be damned if many of the things I was hoping to hear from them that I iterated in my review of their last album materialized in this their third release, Goodbye Normal Street.

Call it a maturing or a coming into their own, but this album marks the most solid offering from this Oklahoma-based band yet, and a defining of their sound, their place in the music world, and as a band that music world should pay more serious attention to.

Goodbye Normal Street starts off a little deceptively, with two heavy, hard country songs that may hint this is the new direction they’re going in when in truth they’re just getting your attention. “Gin, Smoke & Lies” with its Queen-esque “We Will Rock You” opening beat and banjo lead-in let you have fair warning not to expect your usual sweet and safe mainstream fare from this release. “Before The Devil Knows Were Dead” builds out from the sharp wit of the title line to become a tribute to mortality with an approach that waxes towards an almost Hank3, Johnny Hiland-style heavy handed guitar solo. 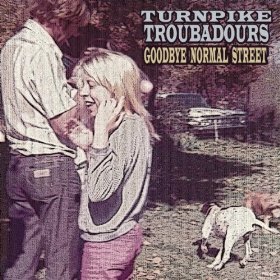 After two soldier-themed songs “Southeastern Son” and “Blue Star”, the album settles in with the style of material you might more be expecting from the Troubadours, yet Goodbye Normal Street is more consistently boss throughout, devoid of some of the valleys of their previous offerings.

When you sit down and try to define it, one of the big differences between mainstream and independent music, or music that people listen to actively, and music people listen to just because it is there, is the presence of a love dialogue. Mainstream music usually works with very catchy, very transparent love themes that are easy to pick up on and identify with, while independent music tends to work more with internal dialogues, struggles and personal experiences, and worldly observations. Love songs can come across as so sacharrine to advanced music listeners, while traditional heartbreak songs about being “oh so lonesome” can be so cliche.

This has left a void for the love song in much of independent music, and this is where the Turnpike Truboadours and songwriter Evan Felker have found their niche. Sharp wit, self-reflection, specific references to characters and situations in an almost Townes or Robert Earl Keen-like storytelling approach imbibes this music with a freshness and engaging nature, revitalizing the old-fashioned love and heartbreak songs in the modern, independent context. “Good Lord Lorrie” gives us all a situation and characters to relate to. So does “Wrecked” and “Empty As A Drum.” The slow, heart-wrenching “Gone, Gone, Gone” may very well be a Song of the Year candidate. “Good Lord Lorrie” may be a runner up.

The Turnpike Troubadours make songs about love cool to listen to again. This is also their ace-in-the-hole, what makes them a band that could break out. They were also very patient with this release, waiting well over 2 years since their last album to let the songs come to them and the groove to materialize before heading into the studio. This band has such good momentum, there no need risking it for some arbitrary desire to present new music on an annual basis.

I’m not sure why I want to be so hard on the Turnpike Troubadours, especially since I like them so much. But as much as this album gives, I still feel like their best music is still ahead. As they get older, they’ll have to rely on even stronger songwriting and even a more defined style as opposed to the energy their live shows are punctuated with today, and this will likely be reflected in their studio work. Even with the strides Goodbye Normal Street takes to defining their sound, I still hear some searching for what the true Turnpike Troubadour sound is.

But I think you’d bee a fool if your a fan of good country music to pass this one up.

Goodbye Normal Street says goodbye to the silly love and heartbreak song formulas that saddle corporate FM, and says hello to how love songs and sad stories in country music should be.