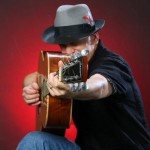 For the last 6 years, Wayne “The Train” Hancock playing Austin, TX’s legendary Continental Club on Thanksgiving Night has slowly morphed into a full blown tradition. Though Wayne is based out of Austin, he plays in town maybe twice a year, keeping his A-Town appearances exclusive, and special.

Opening this year was the greatness of Lucky Tubb with His Modern Day Troubadours. Lucky & Co. were their usual dapper selves, still holding on to the tightness they’ve acquired from much more consistent touring these days. They’d also acquired a new Tele player since I’d seen them last, a hot shot silly sider named Will Owen Gage that was a standout player in a night full of them (wait till you hear who Wayne boasted in his band).

My crossed fingers gave rise to the event I was hoping to see the last time I saw the Wayne/Lucky pairing, which was a live rendition of one of their duets off of Lucky’s new album Hillbilly Fever, and sure enough, The Train was called to the stage early and they rocked out a version of “West.” Unfortunately my moving picture camera was forgotten on the charger at the Saving Country Music headquarters, but the still one was in hand (see pics below) and so was a recording device:

Then it was Wayne Hancock’s turn, and man, Wayne was in rare form. I think this had a lot to do with Wayne being able to cherry pick all-star players from his past to fill out the night’s lineup. Hancock had a smile form ear to ear all night, as some of Austin’s best players traded licks back and forth across stage.

Musicians included Bob Stafford on lead guitar AND trombone, aka “Texaco” that you can hear Wayne call out on his early albums. A mad keys player TJ Bonta who played with Wayne on the album Wild, Free, & Reckless manned the side of the stage, Chris Darrell was on stand up bass, and the great Eddie Rivers was on stand up steel. Eddie is a legend around Austin who now plays with Asleep At The Wheel, but played with Wayne first.

Hancock has a funny way about him, where his smile and mood is infectious. I relate it somewhat to Ray Charles. When Ray Charles would smile, when you knew he was feeling warm, it made you feel warm; some sort of empathetic relationship with the audience that makes the moments that much more special. After each song, the packed Continental Club would burst with applause and cheers. I’ve never seen such reception for Wayne’s music. At one point I saw him utter “Wow” under his breath at the outcry, and Wayne and the band took that energy and reciprocated, as Wayne picked out a songlist that kept the mood moving just right.

Near the end, Wayne’s wife, Gina Gallina Rose Hancock, a performer in her own right, got up on stage for another rare moment. Never before has anyone made a cheat sheet look so hip, as the love birds belted out “I’ll Never Be Free.”

Enjoy an extended picture gallery below. 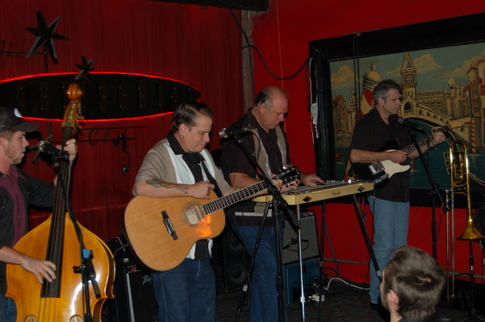