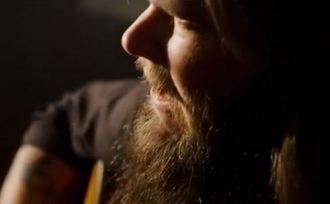 “Have fun hovering above your tombstone and listening to people say ‘who the fuck is that?’ as they make they’re way to Townes’s grave.”

That was the message Texas country artist Charlie Robison had for Sony Nashville CEO Gary Overton after Gary went on record saying, “If you’re not on country radio, you don’t exist.” Saving Country Music has visited the humble grave of Townes Van Zandt in the tiny town of Dido, TX north and west of Ft. Worth, and can attest that the pilgrimage is a moving experience. And the fact that Townes’ songs continue to resonate today is testament to why Robison’s words ring so true.

When Whitey Morgan and his band the 78’s looked to release the first single from their highly-anticipated Sonic Ranch album scheduled to be released on May 19th, they chose one of Van Zandt’s most-recognizable, and most-covered songs. “Waitin’ ‘Round To Die” was the first song Townes ever wrote, and his performance of the song on the Outlaw documentary Heartworn Highways has to be the most moving moments in that legendary film.

Whitey has received some flack over the years for relying so heavily on covers in both his albums and his live performances. And maybe it’s not just that he plays so many covers, but that they tend to be recognizable tracks. But one of the reasons they’ve gotten him to where he is today is because he does them so well. He gives his renditions the “Whitey treatment” like nobody else can. Waylon Jennings, George Jones, and many other country legends didn’t write a lot of their own songs, though like Waylon, Whitey has written some of his most memorable ones.

Whitey has been telling fans to not expect the similar Waylon vibe of his last albums on Sonic Ranch, and we see this coming to fruition in this Townes cover. Expansive, epic, dynamic, and moving, Whitey Morgan and the 78’s really delve into the spirit of the song and make it sound new. And most importantly from a lead single, it gets you really excited about what Whitey has in store with the new release. It’s a great video as well, shot at Bandit Town in rural California using real folks from the surrounding area, not actors.

I think Townes is looking down and approves of this.