On paper, nothing about this album should work. You can’t take one guy, and one guy only, no overdubs or band, just acoustic instruments and a cued mic and call it good. Not to mention that this is an album entirely consisting of covers and traditionals. So yeah, this isn’t Billy Bragg or Charlie Parr. I’m sorry, but that’s just not enough to hold the listener’s ear for an entire album. Or is it?

The key here is that one guy, and that one guy only is the one and only Willie Watson. One of the founding members of Old Crow Medicine Show who left the formidable throwback outfit back in 2011, Willie Watson has re-emerged with a new album and a very, very old approach to country and folk music.

Old Crow has always done very well to make sure they portray themselves as just a gaggle of guys with no real frontman or formalized positions in the band. Nonetheless, fellow founders Ketch Secor and Critter Fuqua, and maybe to an extent the later edition, Gill Landry, have always been the outfit’s most out-front members. Willie Watson was always the guy that blended best in the background, and that’s not meant as an insult, but more of an illustration of his somewhat selfless, straightforward, no nonsense approach to music. As Old Crow would descend into silliness all around him, with a strong jaw and sense of purpose, Willie would be the rock holding the entire thing together, holding steady on the acoustic guitar, acting as the guidepost for the band’s tempo and harmonies. And then when it was his turn to lead a song, it would be the more sensible traditional that kept the group grounded in its original, founding spirit.

So here he is now striking out by himself, somewhat uncharacteristic, but at the same time holding uncompromisingly to what he is as a musician. To become a solo artist, Willie Watson didn’t decide to create a more sensible approach, or learn how to be more personable and well-rounded as an entertainer. Instead he drew even further inward, took what he did and boiled it down even further to the kernel of his creative genius where he’s channeling with almost ghostly authenticity the very folk singers, country troubadours, and blues men he seeks to resurrect through his music. Stern faced and focused, he comes out and sings with such a fierceness, dedication and heart to the emotions and humanity behind the stories he’s singing about, I’ll be damned if Willie Watson doesn’t come across more like Woody Guthrie than Woody Guthrie. 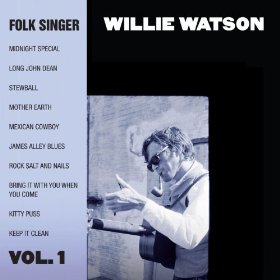 Then you take the songs he’s chosen. The name of this album is Folk Singer Vol. 1 for crying out loud, and it starts off with the well-familiar “Midnight Special”. Everything about Willie Watson’s approach is so dry, you expect it to fall flat on its face as a form of entertainment. But that’s what’s so cool about it—it’s counter-intuitiveness that is also exactly what you would expect from Willie Watson solo, only even more so. There’s such a dedication that is behind this approach he’s chosen that it steals your attention and conveys an intimacy that alludes most music.

And though all of these songs have been heard by the world before, Willie Watson takes the old folk singer approach of making each composition his own by changing up the words while keeping the root composition the same. This isn’t Willie Watson contemporizing or re-writing these songs. This is Willie taking the orthodox, traditional approach of the folk singer to take what his predecessors have done and add his own spin. This is how many of these songs were formed in the first place, and Watson just carries forward that heritage. So even though this is a new album of old songs, there’s a good measure of originality gracing this project.

Willie Watson can downright mesmerize, and he shouldn’t be discounted as a singer and performer just because there’s nothing flashy to his craft. On the song “Mexican Cowboy”, he evokes some singing moments that many pop singers wish they could re-create, while the guile and sense of character illustrated in “Keep It Clean” is spellbinding.

Folk Singer Vol. 1 was produced by David Rawlings, known for his work with Old Crow Medicine Show early on, as well as Gillian Welch and his own solo stuff, but I’m not sure what his useful purpose was for this record aside from staying the hell out of Willie Watson’s way. And refreshingly, Willie and Rawlings didn’t decide to try and get all retro in the recording process and make a foggy album by using antiquated gear. It’s a classic sound, but clear and present. The cover choice of this album is very debatable though. The image of Willie Watson with his steel jaw and wide-brimmed hat is so powerful to the conveyance of his songs, it’s a shame that they showed him here missing his lid and smoking a pipe that doesn’t seem to even fit in the same mood, in sunglasses, and setting a capo on his guitar.

Simply the limitation of how many people’s attention can be held by one person playing old songs makes Folk Singer Vol. 1 hard to recommend vehemently to the wide public. But beyond the limiting approach, it’s hard to find fault or flaw in Willie’s invocation of classics from America’s songbook.