The Wrinkle Neck Mules from Athens, GA and their new album Apprentice To Ghosts was brought to my attention when I was told the Saving Country Music charter meant nothing without more attention paid to them. Not the first time the SCM charter has been called into question and it won’t be the last. But I wouldn’t necessarily call The Wrinkle Neck Mules “country” in the traditional sense. They fit more in sort of the Sons of Bill world, more country-influenced rock than real deal country music, which isn’t necessarily bad, but is a realm I don’t regularly traverse.

What separates The Wrinkle Neck Mules from the standard fare of Southern-based country-inspired rock is a fierce passion embedded in every element of their approach, from their songwriting and singing, to the lyricism and sounds, there is a weightiness, a fiercity, almost like Apocalyptic or battlefield poetry, and very poetic, though their sonic approach and subtly keep it from coming across as dark or Gothic. It’s a great balance that conveys energy and importance, without being uncultured or immature.

No points in the quiver. The headwall comes crumbling

So hot that we shiver, and our mouths they start mumbling.

But you can try to defend, and stay off your back

But the lips get swollen, as the widow makers they make contact. 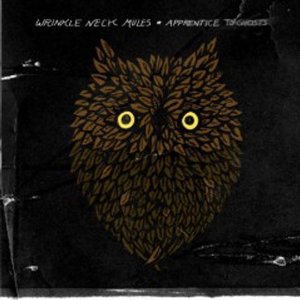 The Wrinkle Neck Mules are a tale of two singers and songwriters. Frontman Andy Stephanian has a heavy Southern, grit paper delivery to match his gritty, hard-nosed lyrical themes. He has the spirit of an old war-torn soul. You can almost see him standing in front of a line of rag tag soldiers with sword in hand, whipping them into a frenzy with a battlefield sermon about how they are men, and their lives are worth fighting for.

With his intensity, Andy Stephanian can inflict a lot of engaging elements into his compositions, a tension and epicness as can be heard in the opening track and one of the best offerings from the album, “When The Wheels Touch Down.”  Andy’s intensity also shows up on “On Wounded Knee”, and pretty much every song he sings, bordering on being taxing to listen to, not from appeal, but from the empathy you feel from the energy you imagine him expelling in his performance and songcraft.

Guitar and banjo player Chase Heard is a little more straightforward, but has moments of trading intensity with Stephanian in his songwriting. I know I started off by saying these guys really weren’t country, but another standout track from the album is one of the most country of the album, “Leaving Chattanooga”. It is familiar enough to feel right, without being cliche.

Purchase Apprentice to Ghosts from the Wrinkle Neck Mules