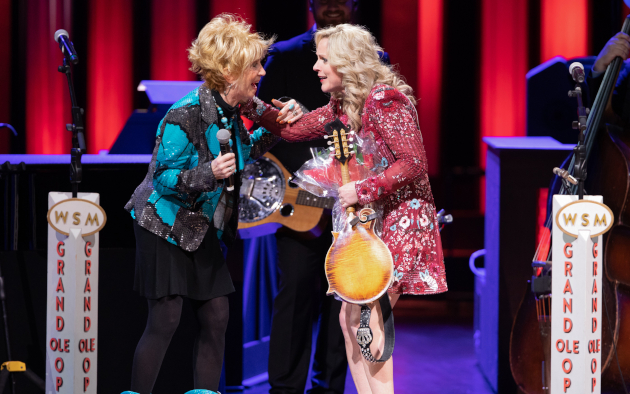 The current “Queen of Bluegrass” Rhonda Vincent will be the next member of the Grand Ole Opry. Surprised on stage by mentor Jeannie Seely Friday night (2-28) during the Grand Ole Opry presentation, Vincent had to ask Seely twice if she was serious (which of course she was), before Vincent responded “Absolutely, 100%. Oh my gosh, I grew up listening to the Grand Ole Opry.” Vincent had been signaling for years that she wanted to be a member. Her full induction will be March 28th.

One of the regulars on the Grand Ole Opry stage who hadn’t been rewarded with a full-time membership, and with seven Grammy nominations and a seven-time IBMA Female Vocalist of the Year recipient, Rhonda Vincent certainly has the prestige and respect to become a member of country music’s most historic institution.

Originally from Greentop, Missouri, Vincent started performing in the family band The Sally Mountain Show at an early age, later launching a solo career in both the country and bluegrass fields to moderate success on the Rebel and Giant record labels, and later for Warner. It was when Vincent signed with Rounder Records in 2000 that started her historic run in bluegrass, dominating the scene for nearly a decade as the genre’s leading lady. She’s continued that success into the current era, winning the Grammy for Best Bluegrass Album in 2018 for All The Rage: Volume 1.

Though bluegrass and mandolin are what Rhonda Vincent are best known for, she has been a regular collaborator with country artists over the years as both a player, harmony singer, and stage performer. Albums from Dolly Parton, Alan Jackson, Tanya Tucker, Joe Diffie, and many more include contributions from Rhonda, including her collaboration with Daryle Singletary from 2017, American Grandstand.

Along with the invitation to Gene Watson on January 17th, the Opry is signaling an effort to finally reward many of the artists who’ve long upheld the Opry traditions, but have eluded proper induction well past their time. Though new Grand Ole Opry executive producer Dan Rogers has said there won’t be any reinstatement of Hank Williams, he is signaling an effort to make sure to honor many long-time Grand Ole Opry performers with the first two picks for Opry induction under his watch.

“Throughout her award-winning career, Rhonda has always made time to visit us at the Opry,” says Dan Rogers. “She is a force of nature on stage, and a friend to fellow artists and fans alike behind the scenes. Her songs have a home among the many styles of music we celebrate at the Opry for the rest of her career.”