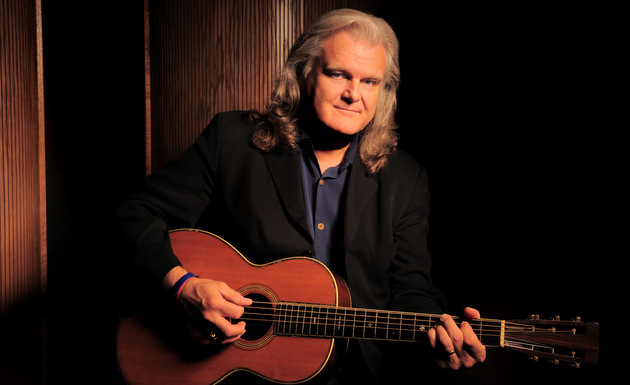 Ricky Skaggs is the new “Modern Era” inductee into the Country Music Hall of Fame.

The announcement came Tuesday morning (3-27) at a press conference in the Hall of Fame rotunda in Nashville hosted by Garth Brooks and Trisha Yearwood. Dottie West was also announced as the Veterans Era Inductee, and Johnny Gimble was announced as the Musician inductee.

“I just walked by a huge picture of Jimmie Rodgers, The Singing Brakeman, and went ‘Oh, wow!'” Skaggs said in his acceptance speech. “My God, this is really big. That was my dad’s favorite singer … That’s the greatest thing about music. We don’t do it for the money, we don’t do it for these awards. I came to Nashville to make music, to record.”

Ricky Skaggs also spoke on the importance of preserving the sound of country music.

“I loved coming to Nashville when Nashville was the Nashville that many of us loved so much. It’s changing a lot. We’ve got to change in ways, but we’ve still got to be the same. That’s why people love what we do because we haven’t changed. We honor our fathers, and honor the elders of the music. Just think about all the people that’s in this hallowed room here that we’ve honored, that we’re standing on their shoulders of, that paid a tremendous price so that we could ride around in buses.”

The 63-year-old Cordell, Kentucky native has experienced as diverse of a country music career as anyone, and certainly earns this distinction both from his commercial success, and his commitment to country music throughout his life. Ricky Skaggs was a pupil of Bill Monroe on mandolin, performed in Ralph Stanley’s Clinch Mountain Boys with Keith Whitley, played mandolin and sang harmony in Emmylou Harris’s Hot Band including arranging the music for her album Roses In The Snow, and even played with Flatt & Scruggs at the tender age of seven.

At the same time, when mainstream country in the early 80’s was looking for superstars, Ricky Skaggs answered the call as a front man and reached the very top of the country music mountain. Through the early and mid 80’s, Ricky racked up a dozen #1 hits, and was awarded the highest distinction for a country artist: the coveted the Country Music Association Entertainer of the Year in 1985, one of eight CMA’s he would win in the era.

As mainstream country moved on to bigger, flashier names in the early 90’s, Skaggs reinvented himself again and reached back to his bluegrass roots to eventually became one of the most revered mandolin players and men of bluegrass that is still alive today. A tireless champion of the roots of country and bluegrass music, Skaggs is a living legend that looms large as a figure that has successfully bridged country’s formative years, its commercial rise, and its current success with class, taste, and musicianship. The Country Music Hall of Fame was built for a man like Ricky Skaggs.

Ricky Skaggs will be officially inducted in a Medallion Ceremony later this year.