Riley Cooper’s Racial Rant An Embarrassment For Country Too

Yesterday, Philadephia Eagles wide receiver Riley Cooper was caught up in a public controversy when video surfaced of him saying, “I will jump that fence and fight every nig**r here!” at a June 8th Kenny Chesney concert held at Philadelphia’s Lincoln Financial Field. Cooper immediately took to Twitter to apologize for the incident, but not before it fueled a media storm with the racial epithet spreading like wildfire across the internet.

Implicated in the viral event was not just Riley Cooper, but Kenny Chesney, and country music. The video was originally posted by crossingbroad.com, but really blew up when big sports site Deadspin posted it, characterizing Cooper as a a “racist hillbilly at a Kenny Chesney concert.” With the story saturating the sports world—a world that doesn’t necessarily interface with country music on a regular basis—similar characterizations of country music fans as racist hillbillies have spread with it, becoming a subplot and discussion point about the incident. 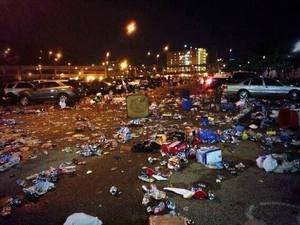 It doesn’t help that this is the second time in 6 weeks that the personal behavior of country music fans and the NFL have interfaced. In late June, a Kenny Chesney concert at Heinz Field, home of the Pittsburgh Steelers, became a cesspool of humanity, with 30 tons of trash left behind as litter in the parking lot, and 73 arrests made after multiple fights erupted. Local residents and football fans have since banded together to try and keep Kenny Chesney from returning to the stadium.

As Saving Country Music has written about at length in the past, the intrusion of a fighting culture into mainstream country music realm has spread an erosion of values that is translating into the personal actions of fans. Even before the Riley Cooper racist video surfaced, a separate story and video was already out there about him fighting in the parking lot beforehand. And before these Riley Cooper incidents or even the previous story of the Kenny Chesney concert at Heinz Field made national headlines, 68 people were arrested in Indiana earlier in the Kenny Chesney “No Shoes” tour for fighting and other infractions.

Meanwhile Kenny Chesney himself has deflected blame from himself for these incidents, even attacking Alco Parking in Pittsburgh for “publicly slandering his fans” over the incident, with the Steelers jumping on, concerned about their ability to promote any future concerts at the stadium. The Alco parking president responded by saying, “If the Steeler organization is waiting for an apology from me, I can only characterize my sentiments with a title to an old country-western song, ‘If the phone don’t ring, it’s me.’”

Kenny has since commented on Riley Cooper’s rant, saying:

I’m as shocked as anyone to see the video of Riley Cooper that’s started circulating on the internet. I don’t believe in discrimination in any form, and I think using language like that is not only unacceptable, it is hateful beyond words. To judge an entire audience by one loud mouth isn’t fair … not to the NFL, not to the city of Philadelphia and that awesome crowd, not to my band and crew and certainly not to me, who believes music is about bringing people together for friendship and forgetting about the things in life that bring you down.

In the end Riley Cooper’s actions, and the actions of Kenny Chesney fans at the respective concerts are their actions and there actions only, and don’t represent the actions of Kenny Chesney, country music fans, and certainly not the sentiments and actions of many independent and traditional country fans whose distaste for Chesney was firmly ensconced before his fans decided to start misrepresenting the behavior and values country music to the rest of the world.

But misrepresenting country fans is exactly what these continuing incidents are doing, with Riley Cooper simply being the latest example, and likely not the last.