Robert Ellis & “The Lights From The Chemical Plant”

Texas native and current Nashvillian Robert Ellis is certainly a candidate to take that critical acclaim baton from Jason Isbell and run with it as an artist who seems to effortlessly deliver songs with cutting emotional moments in an awe-inspiring display of deft creativity. His much-anticipated new album Lights From The Chemical Plant is full of those instances that give you shivers from their bold illustration of wit and self awareness. There’s this sort of graceful command to his songwriting, a confidence beyond his 25 years, to where even when he turns a phrase that you can anticipate or that feels tired, he’ll throw a little hitch in the timing almost as to announce to the listener it’s cliche, in turn erasing the banality of the moment. 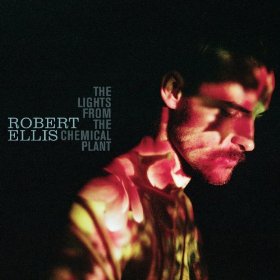 The last album from Robert Ellis, 2011’s Photographs, started out as a mostly-acoustic work that trended toward a downright honky tonk sound by the end, and won him deserved critical praise. The Lights From The Chemical Plant, though certainly with its country moments, is overall more of a classic pop album, referring to influences like a post-Garfunkel Paul Simon and James Taylor. The first song on the album “TV Song” is very much out of the Randy Newman playbook, full of irony, but graced with such a loving perspective for its object of ire, you can’t help but be awed by the intellectual skill such a song displays.

Many 25-year-olds don’t hate their parents, and never did. There’s not that inherent sense of emptiness and despair, but a sense of quiet celebration. With The Lights From The Chemical Plant, Ellis celebrates the other side of his musical upbringing, that likely wasn’t presented to him as being in conflict with his country roots, but in concert with them. However, much of the current Robert Ellis sound still emanates from the acoustic guitar and pedal steel. The de facto title track “Chemical Plant” is a sweeping, rising, memory-inducing song, very much bemoaning the march of progress and time no different than more accessible country music fare might, just conveyed in a much more intelligent way.

“Steady As The Rising Sun” takes a dedicated look in the liner notes to convince one it was not indeed written by James Taylor, while Paul Simon’s “Still Crazy After All These Years” is a little more obvious as a cover. There are a few very long songs on this album, and at times it becomes somewhat of a problem. The 6 1/2-minute “Bottle of Wine” does a good job capturing a sullen, Tom Waits-esque mood, but the tone of the piano seems a little to resonant and bright, and the song just goes on a little too long to maintain the mood or story. “Houston” is one of the album’s best at highlighting Robert’s strength of songwriting, but the fusion jazz-like ending gets buried somewhat, despite its functionality at offering something different and spicy for the album.

The 7-minute “Tour Song” however could probably go on even longer in the way Ellis weaves a masterful web of language clearly told from his own, heartfelt perspective. “Pride” and “Only Lies” work very well in a way that is unique and new, but that also refers back to the classic mode of 70’s songwriter material. “Sing Along” is the up-tempo, and most-decidedly country song on the album, though it’s counter-religious message might ruffle its core sonic audience. Appeal for “Good Intentions” will be much more universal. In an album with a fiercely artistic bent, this song is rousing and infectious without compromising it’s substance and creativity.

The “Not For Everyone” stamp should be slapped in red letters across the cover of this album, especially for people who consider themselves more country fans than Americana or singer-songwriter fans. But Robert Ellis has done superlative work, and will be graced by the singing praises of critics and cultured roots fans that will likely last all the way until they compile their end-of-year lists.

Purchase Lights From The Chemical Plant from Robert Ellis