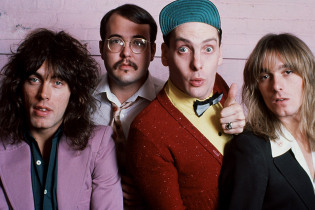 Jan Wenner and his underlings at the Rock and Roll Hall of Fame announced their newest class of inductees very early Thursday morning (12-17), and the list included Chicago, Deep Purple, Steve Miller, N.W.A., and the power pop outfit originally formed in Rockford, Illinois in 1973, Cheap Trick.

Timed to coincide with the Rock and Roll Hall of Fame announcement was the Cheap Trick news that they have a new album on the way called Bang Zoom Crazy…Hello. It will be the band’s 17th total album, and their first album in over five years. And it will be released on country music’s fastest-growing major label—Big Machine Records.

But don’t worry, it doesn’t appear at the moment that this is yet another instance of a rock band growing long in the tooth and wanting to “go country” as some worried after hearing the announcement, and something Big Machine Records CEO Scott Borchetta helped facilitate for Aerosmith’s Steven Tyler. If anything, this is another example of Big Machine Records going rock.

“Coinciding with their entry into the Rock and Roll Hall of Fame, I am beyond proud and excited to announce that Cheap Trick are the newest members of the Big Machine Records family,” said Scott Borchetta. “As a band, they’ve never stopped rock’n the free world and they play every night with as much conviction as their first power-pop-punk club shows from the mid ’70’s. I can’t wait for Cheap Trick fans everywhere to have the new album.”

Along with the Steven Tyler signing and a strange country-manned tribute to Mötley Crüe, Scott Borchetta has been letting his hair rock roots show lately. And though Cheap Trick doesn’t really fit in the hair metal or country music classification, if Scott Borchetta thinks he can sell more records than they cost to make, he’s proven he’ll pull the trigger on just about any deal regardless of genre.

After trying to work out a sale of Big Machine to a bigger label such as Warner or Sony earlier this year, Scott Borchetta now seems to be aiming to make his own music empire to rival America’s other mega labels. As the home of Taylor Swift whose now gone pop, the signing of other exclusively pop artists, and now a legacy rock act on the label, Borchetta and Big Machine are showing there’s no boundaries to the label’s reach. Big Machine has also had success with older bands in the past, including the recently Grammy-nominated Mavericks, and with the NASH Icon venture which looks to put older country artists back in the spotlight.

The implications for country with the Cheap Trick signing (if any) are that one of the genre’s largest and fastest-growing labels is full speed ahead with it’s plan to build an empire. And they’re willing to go well out of the country fold to get there.