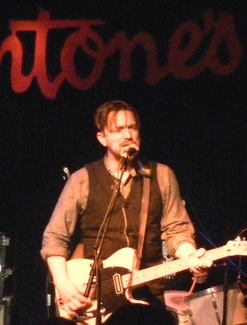 It’s not that JD McPherson does anything different than many other artists have done before him. It’s just that he does it better.

Good music will always be relevant, and JD McPherson is living proof of this. A strict revivalist of the 1950’s rock & roll blues, his music has branched out and burrowed into the consciousness of many folks not regularly susceptible to the pull of a straight-laced throwback rock & roll show. Rockabilly fans appreciate his style, though his rockabilly influences are slight. Traditional country fans appreciate his classic taste, but he’s not really country. Blues fans appreciate his approach, but it still remains more rock & roll than blues. Punk fans love his energy, but he’s in no way a punk hybrid or derivative. And anyone with a pulse can’t help but be rocked when JD rears back and lets his powerful voice fly.

JD could very easily have gone in the punk-infused or rockabilly direction, and this may have been an easier step to music success to endear himself to an established scene. But this is where JD McPherson separates himself–by being a strict revivalist of the mid-century vibe and resisting all temptations to fall into the rage in music these days of mixing it all together. By keeping it pure, McPherson appeals to an even wider audience and becomes an even bigger bridge across musical differences than many genre benders could ever be.

On Saturday night 3-2-13, JD McPherson held forth at Antone’s in California-fying west Austin to a packed house house of folks whose Saturday night garb proved McPherson’s wide and diverse appeal. Opening the show was the incomparable James “Slim” Hand, promoting his recent release Mighty Lonesome Man, with Beth Chrisman of The Carper Family joining him on fiddle. The second act of the night was The Bellfuries who had been touring with McPherson for 5 days previous. Bellfuries frontman Joey Simeone wrote the song “Your Love (All That I’m Missing)” from McPherson’s album Signs & Signifiers, and the two had a special moment in the night as they shared the song on stage. 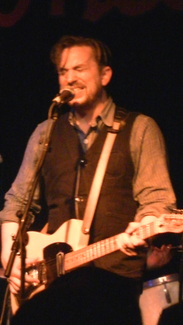 Without the showmanship of rockabilly or the visceral appeal of punk, JD McPherson relies on dynamics and adroit, dexterous players to make a more well-rounded sound devoid of trend or fashion. You never know where a JD McPherson song is going to take you. It could start off slow and stay there, or start slow and end out-of-control. At the same time there’s always a steadiness, a heartbeat that keeps each song grounded.

Many of JD’s songs could speed up so easily. They want to so badly, and by not doing so they create a tension in the music that enhances the energy level and experience. Though JD is commonly compared to Little Richard and Fats Domino, and more modern-day comparison would be the recently-deceased Nick Curran, who JD’s drummer was wearing a shirt of on the night. Nick’s unique gift was his ability to bring uncontrolled excitement to his music, and the wild-eyed approach and tempo is what appealed to people. JD McPherson’s energy–though certainly still evident to the naked eye and ear–resides just below the surface and emits a more steady, sustainable experience. It is akin to the difference between enjoyment and fulfillment.

JD McPherson’s band is world class. A spot behind McPherson must be one of the most coveted spots in the retro rock & roll world. It is capped by bass player, collaborator, and producer Jimmy Sutton, who took a couple of opportunities to lead the band himself. Behind every good #1 is a #2, and that is what Jimmy Sutton is to JD McPherson.

Watching JD McPherson live, you can tell why Rounder Records picked up his album Signs & Signifiers for re-release. You can tell why he was invited to play Letterman, Pickathon, and Bonnaroo. His is the rising star of the pure, rock & roll revivalists, and a treat to experience live.