If you don’t know, Roger Allan Wade is the cousin of “Jackass” nut Johnny Knoxville, and has written songs for Johnny Cash, Waylon Jennings, George Jones, Hank Williams Jr, and others. He also released the album All Likkered Up

on Johnny Knoxville Records in 2005.

Also if you CLICK HERE you can see the video for Wade’s “The First Time I Saw Waylon,” which was directed by Johnny Knoxville, and includes never before seen footage of Waylon.

I’m not going to say I’m a huge Roger Alan Wade fan, but he’s definitely a character and a funny and good songwriter, so I’ll be tuning in tonight for sure.

PS: Johnny Knoxville has also been involved in projects with Jesco White, and is friends with Hank III. 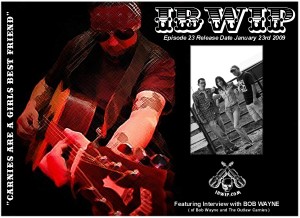 Yep, that’s Bob Wayne, and the It Burns When I Pee Podacst has announced he will be the guest for Episode 23, “Carnies are a Girls Best Friend.”

They will also be doing a live vidcast of the taping of the show THIS THURSDAY (1-15) that you can watch live and even participate in through the magic of the chatroom at the IBWIP UStream Channel. You might even see me hanging around the chatroom, you never know.

I’ll tell you, the last few months it seems like the Bob Wayne news has been coming hard and heavy. First the duet with Hank III on Damn Right, Rebel Proud, then a European Tour, then he got his music online. This might be the year we see ol’ Bob take the next step in the underground country music scene.