Roger Alan Wade, one of the best songwriters out there, has released his new album called Deguello Motel, created from sober reflection of 30 years of hard living. Wade, known just as much for his irreverent songs and being the cousin of Jackass’s Johnny Knoxville as he is for penning songs for Waylon Jennings and Hank Jr., took a more serious approach with this album than his previous two, All Likkered Up and Stoned Traveler. When I interviewed him for The 9513, he talked about the album, and the grand approach he was taking with it: 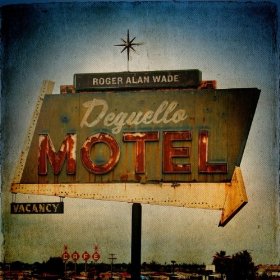 At the Alamo, any time the Mexican Army would surround it, they would have this song they’d play called “DeGuello,” which meant “leave or die.” That was kind of my life so I wrote this song called “The DeGuello Hotel,” and that’s gonna be the title of the album. I’m really proud of it because it was one of the first things I did clean and sober. And it let me know I could write clean and sober. I’ve about got the whole album put together, it’s really going to be special. I want it to be like Red Headed Stranger, Honky Tonk Heroes, Blonde on Blonde or Grievous Angel by GP [Gram Parsons]. I really want to make something like that, that I can sleep with, look myself in the mirror and know I did my best.

Listen to the rest of the Roger Alan Wade interview.

This is without question one of my most anticipated albums of 2010, and from what I’ve heard so far, it lives up to my expectations. Unfortunately the news slipped by me and every other news outlet when it was officially released on September 26th. But now that I am back in the loop I have a copy in hand and a review coming.