Only six months removed from releasing the Saving Country Music Album of the Year called Deguello Motel, Roger Alan Wade is right back at it, just releasing a brand new album that is light years away from the sober and reflective DeGuello, called Too Fat To Fly. Roger made the announcement about the release on Blue Ribbon Radio Episode #50:

It came out last week, the day of the horrible tragedy in Japan, so I didn’t want to get on chirping about it too much out of respect for what’s going on over there. But now I just want to tell everybody that Too Fat to Fly, our brand new album, we released the single about a month or so ago, but this is the album. Man, it is the polar opposite of Deguello Motel. It’s tons of fun. We figured it was time to have a little fun again. 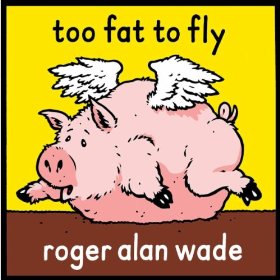 When Saving Country Country Music interviewed Roger last May, he mentioned that “Too Fat to Fly” was inspired by the story of filmmaker Kevin Smith getting kicked off a Southwest Airlines flight. From The 9513:

Remember that fat guy that got kicked off the airplane? Kevin Smith? Well Knox (Johnny Knoxville, Roger’s cousin) called and said, “Hey you gotta write a song about that.” So I wrote “You’re Too Fat to Fly.” Well they’ve been down in Orlando filming for the new Jackass movie. So he calls and says “We need you to finish two more verses because we’ve got a skit we want to use it in.” Nowhere else in the world could you get “You’re Too Fat To Fly” in a movie.

If anybody has a right to do that, it’s ol’ Shooter, coming from that bloodline, you know Waylon started the whole thing. I think he’d be proud of Shooter. He treats people right, he’s so kind and talented, and (I am) just a big fan. I’d love to see anything he tries like that make a mark. It seems like everyone has their heart in the right place.

A review is coming, but until then you can preview tracks and purchase Too Fat to Fly.