Ronnie Dunn Reminds Us That We All “Bleed Red”

When the Brooks & Dunn breakup happened, it seemed to reveal the ills of the Music Row approach. It was rumored that the duo hadn’t spoken to each other offstage for years. They toured in separate buses. Except for a ritual of taking a whiskey shot together before taking the stage, they avoided all personal interactions, yet we as fans were supposed to believe the charade they presented onstage that they were best buds. Like Lady Antebellum having to hire a mediator to keep the band together, the money was just too rich for them to not fight through personal disagreements and keep the facade of a happy music life alive.

Trying to point to who the bad guy was in the duo may be as polarizing of an exercise as talking politics in mixed company, but Kix Brooks was the one saying he wanted to be “relaxing on a Caribbean island” by the age of 60, while Ronnie Dunn used his exit from the duo to immediately launch a solo career. However much and for however long Ronnie Dunn was willing to play the part, it’s hard to say that music wasn’t still deep in his blood. And when word came down that Ronnie had been writing with Texas songwriting legend Ray Wylie Hubbard earlier this summer, it was hard to say that the man didn’t have some measure of taste.

Ronnie Dunn released his first self-titled solo record in June 2011, and it was one where the chatter surrounding it made me pay a little closer attention to it than I may otherwise a Music Row release. Terms like “traditional” were tossed about, but I found it a little too laden with arena rock guitar to get into the project as a whole. As Ronnie posted on his Facebook page on the night of the CMA Awards, “Spent the day in the studio putting Aerosmith guitars on country songs.” That about sums up the album Ronnie Dunn for me, even though the release undeniably had its moments, of which the song “Bleed Red” might be the best. 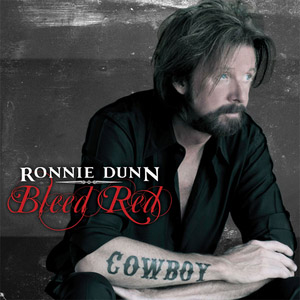 “Bleed Red” comes at the point in the album when every Nashville-based Music Row project must pay its tribute to America and the troops, despite the sincerity of the writing or how sold the performer is on the message. These flag-waving songs have become the most trite, most predictable cliche in country over the last decade, bordering on gratuitous in the way they commercialize, if not outright exploit the troops instead of supporting them because of their objectionable sentimentality.

What’s refreshing about “Bleed Red” is even though it has the epic, anthemic approach indicative of the flag-waving anthem, it is not about politics, or any polarizing subject at all. It’s about the opposite. It’s the antithesis of the awful, too-often called upon emotional-driven overballad, that doesn’t sacrifice the soul-stirring epicness that makes these type of songs the best reminders of why we love music.

Instead of barking platitudes, “Bleed Red” resides in ambiguity, eroding prejudice and polarization by pointing out our universal humanness in a scope that would be impossible to do with the same words if they were devoid of song. Its message is crushing, not from the complexity of thought it inspires but in the simplicity of its moral.

But all of that stuff aside, the best part about “Bleed Red” is the vocal performance by Ronnie Dunn. There is nothing supremely challenging about how the singing part is structured in this song, or where the register resides. Ronnie makes it challenging nonetheless by voluntarily weighing every word down with such deep, authentic emotion. His voice is where this song goes from cheesy to meaty. He sings the shit out of it. Few could sit back and see the bead of sweat forming across his brow, the red face, and not feel raised hairs as he bellows this song out straight from the soul, and accuse him of pandering or playing a part.

“Bleed Red” isn’t just a song, it is a performance; a feat of emotional expression. And foremost, it is a reminder.

Is “Bleed Red” country? Maybe, maybe not. But it’s good.

Didn’t care for the official video for “Bleed Red”, but this live version seems to capture the right vibe.