To do Ronnie Dunn and his new album Peace, Love & Country Music justice, one doesn’t need to write an album review, one needs to do something in between an in-depth psychoanalysis and a diagramming treatise. There’s so much going on here, so many tentacles to the current Ronnie Dunn story, and ones that reach far beyond the music itself, that it’s hard to know where to even start, or to end for that matter.

I guess the first place to start is to try and set the context of just where Ronnie Dunn is in his career, and where he came from. Because Brooks & Dunn was so overshadowed in their day by Garth Brooks, George Strait, Alan Jackson, and the other solo artists of the 90’s, and because his name was only given half credit as a member of a duo, it may be difficult to appreciate just what a mark Ronnie has put on country music. But his impact has been nothing short of towering. Brooks & Dunn sold 30 million records. Their signature album Brand New Man sold over 6 million alone. They had 30 #1 singles. They won the CMA for Vocal Duo of the Year a remarkable 13 out of 14 years between 1992 and 2006, and won Entertainer of the Year in 1996. Their career and impact were historic, and Hall of Fame worthy.

And now, Ronnie Dunn is a defector. He is one of the leading voices of dissent against the institutions presiding over American country music. He has created a loyal and rabid following of tens of thousands of disenfranchised music fans. On a weekly, and sometimes daily basis, Ronnie Dunn is decrying Music Rows ways, specifically criticizing the exclusivity of radio, the stamping out of creativity by record labels, and the way the business treats its talent, young and old.

Think about it: This is one of Nashville’s biggest bread winners of the last 25 years, and he’s now a turncoat. The quotes from Dunn and the topics he’s broached about Music Row’s debauchery are so numerous, I couldn’t even start to delve into them and do it all justice. But long story short, this is a guy that fought Nashville’s wars for a nearly a quarter of a century, and now he’s fighting against them. “I did it for 20 years, and I learned all it was was the mainstream way of doing things was just where ideas go to die these days,” Dunn said in a recent interview. “Mainstream is the road to mediocrity. And it took me 20 years to realize that. But it got to the point to where everything we would come up with to do as maybe an idea or something we thought was fairly innovative, we would get cut off at the pass. So it’s time. It felt like time to start to try to do different things.” 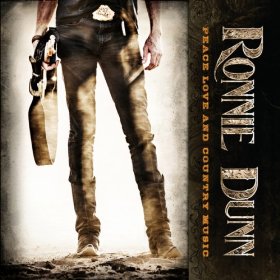 And doing things different is what he’s done. Ronnie Dunn is a completely independent artist now who owns his own record label called Little Will-E Records. During the CMT Awards in Nashville last summer, Dunn set up an encampment on lower Broadway guerrilla style, and as the throngs of people poured out of the Bridgestone Arena, Ronnie played three of his new songs off the album on the roof of a nearby building as a promotional stunt. No permission, no permits. He even got in trouble with the Opry for shining a light banner on the roof of the Ryman asking “Who’s Ronnie Dunn?” Depending on your perspective, Dunn had either lost his mind, or finally found it and come to the side of believing in music over money.

All of this was great. Here was one of mainstream country’s biggest stars spouting the same type of rhetoric that one may find on Saving Country Music on a regular basis. Then there was news he was writing songs and recording with none other than Texas music guru Ray Wylie Hubbard. Everything was setting up quite nicely for the release of Ronnie Dunn’s first independent record to be a sort of musical insurrection perpetuated by one of Nashville’s own, with reverberations reaching who knows how far into the dug in foundations of Music Row.

But then one little pesky problem materialized just as it seemed like Ronnie Dunn might be the chosen one we’d all been waiting for to lead country music out of its current wasteland. Despite all of Ronnie’s talk about how unjust it was that classic country no longer had a place on country radio, and how aging talent was getting pushed aside for young pups with no respect for the genre and playing music that was more indicative of rock than country, here comes Ronnie releasing songs that sound exactly like the music he’s criticizing.

One of the first songs we heard from Peace, Love & Country Music was called “Country This”—a complete hard rock guitar-driven bro-country mega anthem with ultra-stereotypical laundry list lyrics and absolutely no story or soul. I mean this thing was terrible. And I wasn’t the only one all of a sudden taking a second look at what Ronnie Dunn was doing. “Kiss You There” was another one of Peace, Love & Country Music‘s first offerings, and despite affording a little more story, it almost seemed to be walking the edge of country rap, with little EDM moments peppered throughout the song.

However promising Ronnie’s off-the-stage rhetoric had been, to say his music wasn’t syncing up with his words is a gross understatement. Remember those songs he wrote with Ray Wylie Hubbard? Interestingly one of them showed up in the repertoire of Sammy Hagar, called “Bad On Fords and Chevrolets“. Some in Ronnie Dunn’s camp wanted to revolt, but Ronnie calmed nerves when he seemed to allude that he was using these first singles almost as Trojan horses. He told everyone he wasn’t wasn’t abandoning the revolution, but that he needed to give radio one last shot, maybe to prove that even when he put out songs that were ripe for country’s new format, they would still be ignored if you weren’t in the good graces of Music Row’s major labels. “Mainstream radio does not dictate the full flavor of a multi-song CD,” Dunn assured.

So after many months of spirited discourse from Dunn through Facebook and interviews, the confounding first few tracks, we now finally get to hear the full breadth of Ronnie’s independently-released record. And what do we get? Pretty much what we got in the run up: crossed signals and conflicting messages, though a few good songs here and there.

It’s not that Ronnie Dunn is trying to take advantage of the growing anti-Nashville sentiment, similar to someone like Eric Church and other “new Outlaws” where the rhetoric seems to be nothing more than marketing and a distraction from the music. It seems much more innocent than that, like Ronnie has spent so much time residing within the system and was raised so deeply within its inner workings, that to Ronnie this record and many of its songs are groundbreaking. But when you bring a more global, a more informed ear to the project—one that has truly been versed in independent country and country protest music—it seems almost like parody.

Meanwhile the contradictions are nothing less than striking. Peace, Love & Country Music has a straight up protest song in it called, “They Still Play Country Music in Texas”.

Yes, awesome! Let’s all pump our fists and praise Ronnie Dunn for speaking up! … except that numerous songs on this album are “mixin’ heavy metal with twang,” exclusively. I mean, that’s the whole premise some of these songs are built around.

Ronnie Dunn has all the right sentiments, all the right ideas and philosophies. But when it comes to his actual sonic output, he needs guidance, and guidance in a big way if the message is going to match up with the music. He needs to spend a weekend with Marty Stuart or Vince Gill. He needs someone to walk him through their record collection, explaining to him how we got here. He needs to see Sturgill Simpson at the Station Inn. Though I understand many from the mainstream perspective will hear this album as rebellious, forward-thinking, or even groundbreaking, the simple fact is that it isn’t. It is still a very, very mainstream album. Maybe it’s a mainstream album with good moments, but it’s still one that is cast in predictable turns of phrases and phrasing, and well-worn tones and textures; one that panders for attention, relevancy, and radio play.

As cool as it is to get a protest song like “They Still Play Country Music in Texas” from him, I wish it wasn’t on the album because the hypocrisy inherent in it drags down the rest of the project. Songs like “Country This”, “Cowgirls Rock & Roll”, and “Thou Shalt Not” are every bit dependent on their rock guitar riffs. Hell, “Cowgirls Rock & Roll” is one of the worst “country” songs I may have ever heard, no different than a single you’d hear from Brantley Gilbert or Jason Aldean, with Auto-tuned inflections on the vocal track indicative of modern Jerrod Niemann or Tim McGraw.

And look at these lyrics:

Then again, there’s some very worthy tracks on Peace, Love & Country Music. The first two songs “Grown Damn Man” and “Cadillac Bound” start off the record right. “You Should See You Now” and “Wish I Smoked Cigarettes” are excellently written, and no matter what Ronnie Dunn is singing, it’s hard to escape the fact that he still holds one of the best voices in the business, and came from a time when you couldn’t fake it, or let your fame ride off a pretty face.

Something else that seems to hinder this album is that it took so long to go to print. Ronnie Dunn seems to be in the precarious position of trying to maintain his mainstream relevancy, while at the same time come to grips with the new realities of his career. He wants to lead a revolution, but he wants to hold onto the last vestiges of the spotlight for one last moment. But you can’t have it both ways. There are songs on this album that could have been worthy of radio, whether it’s because they’re good enough and would elevate the format, or because they’re bad enough to be radio hits in country’s current climate. But neither will be given a chance because of all of Dunn’s sabre rattling off stage. Dunn’s plan came off as half baked, and in need of some guidance and perspective from people who really understand where the trends in music are headed.

I like Ronnie Dunn’s spirit, and I feel like there’s a kinship in his fight. And make no mistake, there are many, many country music fans who are listening to his every word about what is happening in country, because his words are rooted in truth. And because of this and a few pretty good songs, I can’t give it a negative review. But don’t get bogged down by the bravado surrounding this album. If you simply listen, you will find it is an album addled by stark contradictions.

One gun up for some good songs and an independent spirit.

One gun down for some very, very bad songs, and a conflicting message.