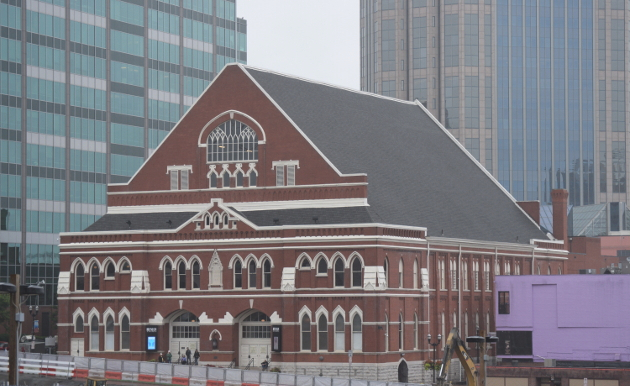 It’s kind of curious that the Country Music Mother Church hasn’t become a conveyor belt for live records like some other important venues in country music have. Billy Bob’s in Fort Worth, TX has a whole series of live albums and DVDs out there. Austin City Limits has a series of live albums as well. In fact it was Emmylou Harris’s 1992 live album At The Ryman from the Ryman Auditorium in 1992 with the Nash Ramblers that help revitalize the original Grand Ole Opry home after it had been shuttered for some 15 years after the Opry moved across town.

Now after Jason Isbell released a Live from the Ryman album in 2018 (granted, with some audio concerns), others are getting in on the action. Grand Ole Opry members Old Crow Medicine Show will release their own Live at the Ryman record on October 4th. The Ryman is like a second home for Old Crow, which made their first appearance on the stage in 2001, and have since played the Ryman stage a whopping 40 times, including 20 times as a dedicated headliner act. This includes the string band’s New Years Eve shows which started in 2009, and have led to Old Crow Medicine Show being considered as sort of the house band of Nashville.

The Old Crow tracks for the live album were not recorded all in one setting. They selected the best 11 tracks from performances between 2013 to 2019 to compile the record. The cover features Hatch Show Print posters from the respective performances, and the album is being released by The Orchard from Columbia Records.

Brothers Osborne have their own live album from the historic venue in the works. Live at the Ryman will be released on October 11th, and feature 12 tracks recorded over a three-day residency the brother duo performed in February 2019.

“Recording at the Ryman is an incredible experience,” says TJ Osborne. “This place never loses its charm or luster. I hope it never does for me. It’s always a special spot. This room just has a way about that even though it’s up on this tier that’s so overwhelming, it has this comforting soul about it. I just always trust this room to take care of us, and it does every time.”

“The ‘Live at the Ryman’ album highlights who we really are,” adds John Osborne “To play this place one night is a gift and an accomplishment that everyone should remember but the fact that we did it three, I can’t even wrap my mind around it.”

Don’t be surprised if these two records and Jason Isbell’s previous one don’t open the floodgates for live Ryman records as part of the venue’s growing legacy. Alabama also recorded a live album at the Ryman in 2014. Brandi Carlile has a Ryman residency coming up in early 2020, and if these performances aren’t being captured for a live record release, they should be. The acoustics of the venue are legendary, the atmosphere is exceptional, and the majesty put behind each performance from the history of the building is something that should be captured more.