Sarah Jarosz’s “Build Me Up From Bones” 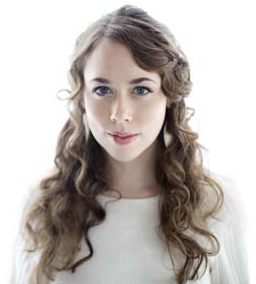 The 22-year-old Texas native Sarah Jarosz symbolizes a victory by so many measures, even before you delve into the substance of her new album Build Me Up From Bones. Just about one of the most difficult maneuvers in music is for the childhood prodigy to transition into the adult performance world with deftness and grace. Jarosz not only mastered this move and stuck the landing, she did so with such ease that her story could be used as a blueprint of how to navigate these treacherous, and sometimes career-ending waters.

Sure, since you were 10-years-old you’ve been charming audiences with your cute songs, ruddy cheeks, and how fast you can move your fingers, but 2013 is the year of the song, and the only value technique and memory have is when they accompany an original story that can touch deep.

Possibly the best lesson to glean from Sarah Jarosz is patience. She already had mastered the mandolin, and her music career was well on its way when she ran off to the New England Conservatory for Music in 2009. But Jarosz doesn’t seem to like things easy. Despite dizzying workloads, she managed to release two albums through Sugar Hill Records and play a slew of shows and tours that never led on to her growing fan base that she was pulling double duty between work and schooling. No worries about a rickety foundation or a lack of preparation from this girl. The seed has been nurtured good and plenty and is blooming at the right time.

Build Me Up From Bones is a bold work of progressive bluegrass that showcases young Jarosz’s developed songwriting and adeptness at composition, while not sacrificing the whimsy and fun an album from a 22-year-old must have to be genuine. Jarosz isn’t playing over her head or having to make up for anything. She’s deep in the pocket of her own original musical expression, built upon the roots of the bluegrass discipline, and inspired by its lore.

The sultry opening number “Over The Edge” with its fiery electric guitar makes it known that our cute little Sarah Jarosz has matured and is ready to take the world by storm, but it may have some worried that she has run from her bluegrass past. Any of these concerns are alleviated with the very next number “Fuel The Fire” that is driven by the familiar chuck of a clawhammered banjo accompanied by fiddle. From there Jarosz works to satiate a myriad of influences without straying too far from a unified sound, including tackling the dizzying verses of Joanna Newsom’s “The Book Of Right-On,” and Dylan’s “Simple Twist of Fate” that Jarosz revitalizes with a very sparse approach, showcasing how her adeptness with instrumentation and songwriting gives up nothing to her vocal prowess.

Her multi-instrumental training goes far in picking the colors for Build Me Up From Bones, though the work in general feels much more like an exhibit in songwriting as much as anything. Of Sarah’s originals, the “Build Me Up From Bones” title track, and the fingerpicked “Dark Road” came across as standouts, but Build Me Up From Bones fails to deliver one sleepy track, even though some ears may yearn for a little more meat than what Jarosz offers in her progressive approach.

It’s boggling when the arguments that bleed over from the country world question how country can respect its roots and still evolve, when time and time again talented artists from a virile and healthy bluegrass world offer such inspiring illustrations of this very practice. Though bluegrass can be hard to break into, it is tooled for evaluating, cultivating, and nurturing talent instead of trying to maximize its returns financially. The result is a system that sees the budding of world-class music worthy of a wide audience, and this is where Sarah Jarosz and Build Me Up From Bones resides.

Purchase Build Me Up From Bones from Sarah Jarosz

Bluild Me Up From Bones, Bob Dylan, Review, Sarah Jarosz