Sarah Potenza Becomes The Next Big Independent Hope on “The Voice” 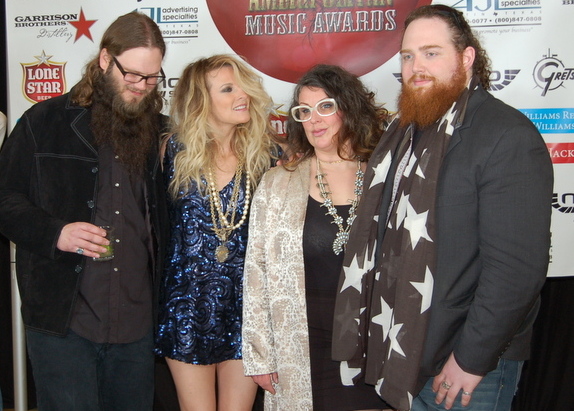 Singer and songwriter Sarah Potenza first entered my music consciousness in February 2014 at the Inaugural Ameripolitan Awards presented by Dale Watson. Here was this boisterous girl with big glasses paling around Elizabeth Cook, and posing for pictures with Whitey Morgan and his guitar player Joey Spina that I had never seen or heard of before. Wanting to put a name to the face, after some cyber sleuthing I discovered Sarah’s self-described roots rock with husband Ian Crossman, and was impressed. Sarah’s smoky, vintage voice was intriguing, and I pegged her as someone to pay more attention to in the future.

Lo and behold Sarah Potenza has now made it through the preliminary rounds on NBC’s singing competition The Voice, and is headed to the finals. Sarah’s participation appears to be the result of the producers of The Voice looking to actively recruit personalities from the greater Americana/independent country world and feature them on the show. Remember all the hoopla made about Jason Isbell being asked to try out for the show? Apparently he was just one of many artists asked from the Americana world, including Sarah.

One thing that’s for sure, The Voice is burning the candle at both ends. It doesn’t just seem like it was a few short months ago I was talking about the eventual winner of last season’s competition Craig Wayne Boyd, it actually was. In lieu of other successful television franchises, NBC seems quite comfortable running seasons of The Voice nearly back to back. We’ll see how wise this decision is in the long term, but for now it has mainstream American captivated. My interest in Craig Wayne Boyd was not so much a rooting one, but that his participation in the show was the impetus for slain country music artist Wayne Mills to be featured on national television in a way he never enjoyed when he was still living. This seemed newsworthy beyond the competition itself.

And that’s why it’s hard to ride artists who decide to participate in these television singing shows, even if you are programmed to stick your finger in your mouth in the universal gesture of gagging every time they’re mentioned. This isn’t the way America should sift through talent and decide who among us is worthy enough to be considered entertainment for the masses, right? Slagging it out in small clubs and touring in smelly vans is the right of passage every artist must endure to instill the soul of real life into their music.

But they don’t call it a culture war for nothing, and in a war, you’ve got to do what you can to win, even if it means sucking in your gut, looking the other way, and cavorting with the enemy to get some face time on national television. Though from the beginning many fans of independent music have laughed off these realty TV singing shows, as soon as one of their own begins to make a serious run, all of a sudden they themselves are taking sides and participating.

After covering The Voice winner Craig Wayne Boyd’s tribute to Wayne Mills, I started to receive many emails from both Craig Wayne Boyd and Wayne Mills supporters. The missives were a bit shockingly impersonal, and mainly just barked instructions of how I should vote and where, what hashtags to use on Twitter, and hopeful pleas to share this information with readers. It went from simply posting a few relevant news stories to now being guilted into participation for an artist I wasn’t to sure was someone I would or could support on The Voice or in the greater music world at large. Who was Craig Wayne Boyd? Singing a bunch of cover songs on national television only told you so much. It wasn’t even that I was against him as much as I just wanted to take a wait and see attitude. 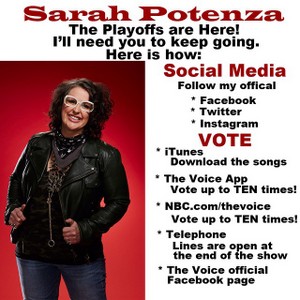 It also got me to thinking about why people vote for certain contestants on The Voice or American Idol. Is it because we recognize members of our own individual tribes and feel like we must support them or risk being bettered by an artist from another genre or scene other than our own? Is there a true effort being put out to find the best singer, or is this simply a popularity contest?

When an artist gets to the level that Sarah Potenza is at in one of these competitions, the machine behind them really gets rolling, as do the shopping lists of how fans should participate and support them. But you look down the list, and it all seems to be a way to rope a dope fans into becoming emotionally invested in a television franchise they otherwise may not be paying attention to. Do you want these artists to win? Well them you have to buy their music on iTunes. Want to vote? Pull out your mobile device, download The Voice app, vote on your personal computer, call the number, 10 times each method of voting, follow the artist on social network, aka consume, consume, consume. Next thing you know The Voice is institutionally engrained on every media device in your home, and you’ve made both an emotional and financial investments into a show six months ago you were calling a sign of the downfall of human existence as an independent music fan.

And that takes me back to The Voice reaching out to Jason Isbell and Sarah Potenza in the first place. Clearly producers targeted a demographic of individuals they identified as dedicated and active music listeners that were probably avoiding The Voice previously. So they go after some of their favorites—some artists both at the top and on the periphery, and attempt to grow The Voice brand through apps and other interactions to integrate a new swath of consumers.

Hey, no offense to Sarah Potenza at all. Even if she gets booted from this latest round of the competition post haste, she has done wonders for her career that spending 20 years riding around in a van playing shows night after night would have never done. And if Jason Isbell had decided “Screw it, I’m game,” and entered the competition, I’m sure it would have sucked even more Americana fans into The Voice‘s sinister web. And do you want to be the only one in your social network feed not supporting your scene’s representative, or your hometown hero on the show?

I kind of do hope that Sarah Potenza wins, or at least does well. But voting? Downloading some app? I guess if I was to vote for anything, I would vote for people to understand what they’re getting into with this thing, how The Voice has become a way to bridge television consumption with your mobile devices, social network feeds, and your music library, and for viewers to look at the bigger picture as they choose just how deeply they wish to interact with these singing shows.