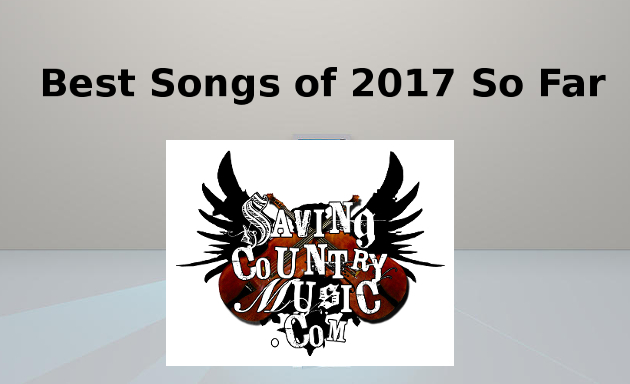 Apologies if you came here looking to replenish your 3rd generation iPod with a fresh platoon of booty shakers. That’s not what this practice is all about. Feel good songs are just fine and help fleet us through the tiresome days, but when we talk about the “Best Songs,” were talking about songs that deliver moments that can change entire lives with their cutting emotionalism and perspective. These songs must make you bleed or cry, or take stock, re-evaluate your life and purpose, and remind you why you’re on this mortal coil, and what’s important.

Unlike choosing the top albums from a given time period, choosing songs tends to be even more capricious and based on one’s perspective. But it’s still an important practice. So don’t use this as a moment to reinforce your own opinions, use it to open your heart to something new. And feel free to share your own insights below on what has moved you in the first six months or so of 2017.

Sunny Sweeney – “Bottle By My Bed”

We often believe that our favorite music artists have all the luck. They get to stand on stage and play the star, traveling the country and world doing what they love, always getting the girls (or guys), while the rest of us are stuck at home living boring lives. The truth is unless you’re selling out larger venues—or even if you are—the rigors of being a musician and the sacrifices you must make, specifically when it comes to family, and especially when it comes to females, is something that frankly most of us are unwilling to endure. This is why there are many who harbor musical dreams, but so few who possess the willingness for sacrifice to pursue them. So we follow along with are favorite artists and try to live the dream through them, vicariously.

“I don’t even know you yet, but I know I love you,” Sweeney sings in such a specified honesty that its hard to handle, and hard to not believe. It’s lines like this that even if you do have kids, or find yourself on the opposite side of the gene pool from being able to bear children, you can still put yourself in those shoes, and feel the yearning that is hardwired into the human experience to procreate, and love. (read more)

The heartache we all feel in the loss of a loved one is a well-trodden song idea often used when the performer wants to have a deep impact on listeners and connect with them on a human level. However, broaching the subject in a way that doesn’t come across as cliché, mawkish, or even self-centered and opportunistic is one of the biggest challenges of these songs, and one of the reasons they don’t always hit the target, despite the honesty they may convey, or how personal they may be the the performer.

Everyone hurts when they lose a loved one. The difference is in how we deal with that loss. Some use it as an excuse to indulge in self-inflicted pain or to excessively lean on vices. Some use it to re-calibrate their life to find meaning or religion. The genius behind Texas country songwriter John Baumann’s approach in “Old Stone Church” is he uses one instance of loss to illustrate all the possibilities of how we each individually cope with tragedy, and in a way that also encompasses the cyclical nature of life, love, and community in an original, and deeply impacting manner.

Jason Isbell – “If We Were Vampires” – from The Nashville Sound

A love song with avid participation from his wife and singing partner Amanda Shires, the song delves into the sad perspective that forever in a marriage or a relationship is ultimately a relative term. Though the fantasy of timeless love may be alive in the hearts of young lovers, as we age and give rise to young ones ourselves and watch age overtake the older ones in our families, the reality that Isbell sings about as “Maybe we’ll get 40 years together” puts into perspective just how fleeting love and life is.

The sad reality is that barring double tragedy, one lover will leave before the other, an not uncommonly with the gulf of a decade or more in between. But Isbell doesn’t point these things out just as a lament or a sharp lesson of reality. He uses perspective in “If We Were Vampires” as a conveyance to one’s own heart to cherish every moment and make the most of it, because those moments, however powerful, are incredibly finite. But most importantly, Isbell uses that perspective to covey a deep affection for his other half. (read more)

To even germinate the idea of writing a song about the man who was let free when Jesus was sentenced to crucifixion is pretty wondrous in itself, but isn’t it a great representation of how we all walk through life holding on to guilt—products of our past transgressions—trying to make the best of second chances, and the past just as much of a burden as the future is a beacon. Barabbas got off scot-free so that an innocent man could die, but sometimes the conscience can be be as fierce as a prison sentence. Even so, life is what you make of it, and regardless of what got you here, you must move forward by being grateful for the opportunity, and gracious for the gift of life. We all owe that to those that died to make it all possible.

Far from preachy, “Barabbas” is even a bit folksy, which makes it that much more approachable. Yet this song is bolstered by the weight of religious moments most all of us have been taught, whether we choose to heed the message. “Barabbas” is about a specific man, and about all of us, and like all great songwriting its message melds to each of our individual stories to mean something different to everyone in the audience. “Barabbas” is pretty genius, but served in such a simple way anyone can enjoy. (read more)

“As a kid growing up, it was my favorite part of the drive on the way to Puxico [Missouri], and also, the saddest part as I was leaving to go home back to Nashville.” says Natalie Hemby. “Only the skeletons of buildings remain, and what was once a thriving city one hundred years ago, is now what feels like a ghost town…a relic of its beauty. I’ve been driving thru that town for 40 years and it has become a landmark of my childhood.”

“Jonathan and Cassandra Lawson are both writers and artists who are married and in the band The Railers. We have become good friends over the years, but the turning point of that friendship was when we wrote this song. Jonathan is from Missouri, and he would also pass through Cairo, IL on his way back home. Jonathan is an amazing guitar player and came up with the beautiful acoustic melody that is the backdrop of the song. He and Cassandra poetically helped me carve the song into a story, my story, my memories. I loved it so much, the day we wrote it, I made them sing it with me over and over again.”

Jaime Wyatt – “Giving Back The Best of Me” – from Felony Blues

Whether it’s an inalienable flaw or cosmic brilliance, nature has designed humans to inherently need another to complete ourselves. We’re almost like half beings instead of whole ones, unable to fulfill some of our most core functions without a counterpart. So we couple up, and put our most basic trust in one another for our survival and future. And even though the practice feels essential, it’s regularly fraught with peril and heartbreak. But the most important thing is that you try to entrust yourself to another, and understand the importance of when someone entrusts themselves to you. Sometimes, the most honest and deliberate action of love is letting someone go, or allowing them to let go of you. While at other times, the hardest action is to allow yourself to be loved, or allow yourself to love someone else. Because loving is the most vulnerable thing a human can do.

Andrew Combs – “Dirty Rain” – from Canyons of my Mind

Gentrification and the destruction of America’s industrial and agrarian Heartland is not just an issue of economics, it’s an issue that scores right at the very psyche of those on the losing end, and in immeasurable degrees. A sense of home is something that is inherent in the human design, and as the communities and buildings that comprise what people and places used to be are either razed in the name of progress, or abandoned to dissolve slowly back into the soil over time, the most acidic result is how the memories and stories of these places are invariably razed or slowly eroded away to a fine dust as well.

You don’t often recognize the warmth and spirit that the sense of home and place gives you on a daily basis when you’re surrounded by it. It’s only when it’s ravaged by disaster, eminent domained by the heartless advance of progress, or depleted over time that it begins to inspire a host of neuroses in how you perceive the world, and yourself. With those lost buildings and places, a little part of you is lost as well, and replaced by the antiseptic nature of uninspiring utilitarianism that despite all the efficiency it brings, takes a toll on the human spirit and the germ of creativity in ways that can’t be quantified. (read more)

John Moreland. Pretty much any song on Big Bad Luv. Singling any out seems unfair to them all.