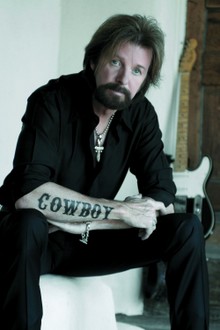 It’s not every day you get trolled by a CMA Entertainer of the Year winner, but that’s what Saving Country Music found itself experiencing Sunday night (12-28) when Ronnie Dunn (formerly of Brooks & Dunn) took to his always colorful Facebook page to post links and commentary to recent stories on SCM about his involvement (or non involvement) with the new Cumulus Media/Big Machine Records’ joint venture called NASH Icon, and Saving Country Music’s review of his 2014 release Peace, Love & Country Music.

Beginning on December 16th, and then more in-depth on December 24th when Martina McBride was announced as NASH Icon’s second signee, Saving Country Music broached the subject of why Big Machine Records, Cumulus Media, and NASH Icon had been completely silent on any announcements of Ronnie Dunn becoming a part of the label’s roster, when Ronnie himself had first hinted, and then confirmed that he’d signed to the label (or signed some sort of deal with them) on November 27th, over a month ago now. But subsequently, even though there’s been ample opportunities for the record label to announce, or at least confirm Ronnie Dunn’s affiliation, including an announcement about Reba McEntire joining a reunited Brooks & Dunn for a series of shows in Las Vegas, there’s been nothing.

At the same time, SCM has gone out of the way to say this doesn’t mean some deal hasn’t been struck between Dunn and the label that won’t be announced in the future. As was said on December 24th, “It doesn’t mean Ronnie Dunn isn’t signed to the label confidentially, or that he won’t be signed to it in the future. But at this point, NASH Icon now officially has two artists signed to their roster, and neither one of them is named Ronnie Dunn.”

And just to point out, Saving Country Music isn’t the only outlet that has noticed nothing official about Ronnie Dunn’s signing has come down from NASH Icon. Music Row in a December 1st piece about Dunn’s Facebook announcement about the signing said, “The label has not officially announced a deal with Dunn.”

Perhaps thinking that Saving Country Music was chiding the country star, or perhaps wanting to add to the speculation, someone posted the first SCM NASH Icon story dealing with Dunn’s unconfirmed status from December 16th on Ronnie Dunn’s Facebook page, with the commentary, “Mystery / intrigue. Did Dunn really sign?” Worth noting, when Dunn posts on his Facebook page personally, he leaves his initials “RD.” No initials were left on this particular post. 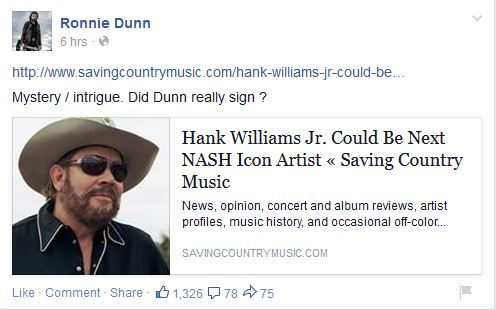 Then a short time later, Ronnie himself posted a link to the “Ronnie Dunn” tag on Saving Country Music. Without getting too technical, a “tag” is a hyperlink to all the articles mentioning an artist or thing, but since the last article to tag “Ronnie Dunn” was the second, December 24th article that mentioned the curious case of Ronnie’s NASH Icon status, it did the same trick as linking to the article directly (which Dunn probably meant to do), with the commentary from Ronnie Dunn being, “Hmmmm RD.” 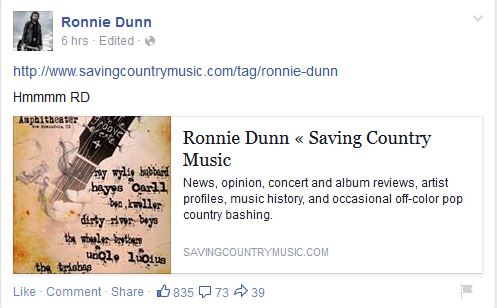 Ronnie Dunn replied to many of the comments left on the Facebook posts personally, but the reassurance either way if Ronnie Dunn was or was not signed to NASH Icon never came. Ronnie did leave an interesting comment where he said, “….IF it can be done, this Cumulus / Icon / Big Machine team can do it. The initiative is backed by some of the strongest players in the game. The right songs, right team (s) and ultimate fan support will determine whether it flies or not. RD.” But again, this was not a confirmation of anything.

So the next question is, is Ronnie Dunn actually signed to NASH Icon? And if he isn’t, what is Ronnie Dunn’s agenda? Is he simply trying to create media buzz? Does he desire to be signed to NASH Icon, and like we see many times in professional sports contract negotiations, he’s trying to negotiate through the media? Did the deal fall through? Are they just waiting for a later date to announce it? These questions remain unanswered, as do queries by Saving Country Music directly to Big Machine for clarification on Ronnie Dunn’s contractual status.

And then a couple of hours later, Ronnie posted a link to Saving Country Music’s review of his album Peace, Love & Country Music from April, with a fairly lengthy commentary/rebuttal to the review in which Saving Country Music awarded Ronnie “One Gun Up, One Gun Down” (meaning a 50/50, or mixed review). Dunn also has “pinned” the post to the top of his Facebook feed. Dunn’s commentary:

SAVING COUNTRY….One of my all time FAVORITE articles !!!

I agree with him about the contradiction grinding endlessly within ME and the MUSIC that I seek, so desperately to be a part of. This stuff is about more than just music.

I am beginning to believe that there may be no balance between mass accepted, mainstream music and sincere, heartfelt stuff with essence… but again, I’m conflicted because songs like Believe, Red Dirt Road, Brand New Man, Neon Moon, She’s Not The Cheatin’ Kind and My Maria, just to name a few, seemed to do it on a mainstream level.
……there’s my problem.

NEVER…have I taken the position, or assumed the posture that I am in any way the guy to lead anyone or anything, anywhere.
That’s a first class ticket with free drinks and a cigar. Freud would turn that down.

***One more quick thing….
I came up with the title, Cowgirls Rock and Roll Tattoos and Pickup Trucks as a spoof on the repetitive cliche’s found in so many songs these days.
I couldn’t get anymore words into the title.
I have to tread lightly though, in the past I’ve used those cliche’s.

In the end….you singled out the TWO songs (Country This and Kiss You There) that were hand chosen by two of the most truly talented, top radio programmers (no names mentioned gents) in the country.

A good friend and publicist told me once, “choose EVERY song wisely, the critics especially, will gravitate to the lowest common denominator if you’re not careful. The weakest link in the chain defines it’s strength.

Malcolm Gladwell wrote in his best seller David and Goliath, that grit trumps almost everything in the long run.

In the end I don’t have anything left to prove, I just like doing this.
I’m determined as ever to get this chapter right.

Saving Country Music has been following Ronnie Dunn and his conquests with great interest for a while now, from his work with Texas legend Ray Wylie Hubbard, to his frequent commentary on Facebook which tends to put him on the right side of issues, and even reviewing (however belated) his chill-inducing single “Bleed Red.” Even if Ronnie Dunn isn’t always right, he’s proven himself to be weird, and that in itself deserves an elevated level of respect and interest. He’s gone so completely off the script at this point for a CMA Entertainer of the Year and a mainstream artist, that if nothing else, it’s refreshing.

But in the end the music still has to prove itself, and with Ronnie’s Peace, Love & Country Music he did prove in moments his commitment to making worthy music. He also proved that old habit’s die hard, and as he had the courage to admit above, extricating himself from the system he’s been a part of for so many years isn’t easy, or something which can be achieved overnight. Also Dunn shows wisdom in how to take criticism: as a means to see where there’s room for improvement, as opposed to taking it as either a personal insult or the result of petty grievances based on jealousy or other motivations. “I’m determined as ever to get this chapter right,” Dunn says, meaning he’s constantly trying to improve, which is all you can ask of artists, and all you can ask of yourself.

Dunn is right. Songs like “Believe,” “Red Dirt Road,” “Brand New Man,” “Neon Moon,” “She’s Not The Cheatin’ Kind” and “My Maria” are excellent examples of balancing quality with mainstream appeal. In the early 90’s when these songs were released, many country music traditionalists may have not agreed with such a statement, but this has been the recurring lesson of 2014—that when looking at the legacy of Garth Brooks and the other artists of the “Class of ’89,” when looking at old school Brooks & Dunn music, when looking at artists who fit the NASH Icon model, you can now see this music was better than critics and traditionalists were giving it credit for at the time, and is such a healthier alternative to what is being produced today. That is why NASH Icon not only exists, but is thriving, whether Ronnie Dunn is directly involved with it or not, or will be in the future.

Of course Brooks & Dunn circa 1992, or Ronnie Dunn circa 2014 is not going to get a lot of the hardline traditional elements of the country genre excited, and don’t think for a second that Saving Country Music has allowed its compass to be coaxed in the wrong direction from Ronnie Dunn’s Facebook flattery. But pragmatism has been the new name of the game in the fight to save country music in 2014 because it’s been so effective.

If Ronnie Dunn, Martina McBride, Garth Brooks, and Reba McEntire return to country radio in a measurable way, which they are with NASH Icon and the more general country music format split, then this is as solid of a victory for true country music as Sturgill Simpson selling 65,000 albums and being nominated for a Grammy. Yes, it would be nice if Sturgill stepped up as more of a leader, but as Ronnie Dunn illuminates in his above statement, it is so unnatural for these performers to assume leadership positions. In the end, the leadership must come from the music itself. Words on Facebook and sites like Saving Country Music can only go so far.

2014 was the year the tide turned, and the sullying seas of country music mediocrity left their high water stain on the face of history to hopefully be measured against diminishing levels in the coming years. Ronnie Dunn, NASH Icon, Ray Wylie Hubbard, Garth Brooks, and Sturgill Simpson all contribute in their own weird ways to this emerging trend; to a rolling back of the losses to hopefully work toward a new day in country music. But it won’t happen overnight, and there won’t always be agreement within the ranks of how it’s Dunn. But in the end the music will prevail over time. That’s why NASH Icon’s most underlying requisite for potential signees is 25 years of proven service and staying power in the genre. Time invariably crowns the eventual victors, and reveals the few with true integrity.