This isn’t going to be some long form praising of Sturgill Simpson’s work in 2014, or yet another rundown of his long list of successes last year. There’s already been plenty of that, arguably too much of it, and I am just as tired of writing about it as you are of reading of it. Yeah yeah, Sturgill Simpson’s great, but his name has become the independent country version of click bait. Music media outlets have sniffed out how hot product he is, and next thing you know he can’t make a bowel movement without someone writing about it, and then reaching out to him for a repost.

No wonder he deleted his Twitter account, and ponders quitting the whole business upon occasion, or putting limitations on his output. It’s great that his music has received so much attention, but it’s the job of fans, media, and even detractors to understand the style of human being their dealing with, and show a little respect for his idiosyncratic nature and privacy. That’s why through much of 2014, Saving Country Music enacted a moratorium on Sturgill Simpson coverage to only be broken for essential news. It’s gotten so out of hand, it makes me sick even having to cue up yet another blank space and peck away towards his praise, but someone has to win this stupid award, and Lord knows Sturgill deserves it.

But this isn’t going to be as much about praising Sturgill Simpson as asking for a little bit of perspective from us all. Sturgill Simpson’s job is to play music, not to save the world, or to save country, and it’s not fair of us to foist our dreams and desires on an artist who already seems a little unsure of standing in front of people and asking to command their attention. The everyman vibe from Sturgill is one of the things that makes him such a lovable character, and instills his music with an authenticity most musicians can only attempt to interpret into their persona. 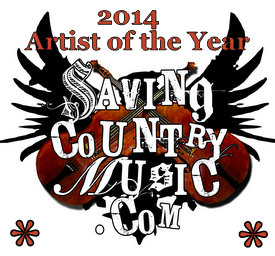 Some have accused Saving Country Music of unfairly lumping all the woes of country on Sturgill’s back, with an emphatic “Sturgill Simpson isn’t saving country music!” coming from a number of high profile outlets in 2014, as if since this site has been a proponent of Sturgill and its name is such, then these parallels are fair to draw when in truth this site has gone out of its way to if anything relinquish that burden from Sturgill that some well-minded but naive souls may place upon him.

Saving Country Music’s work for Sturgill Simpson has been done for the better part of a year, except for maybe trying to offer some counterbalancing and perspective. I know my place, and though Saving Country Music’s feisty little bullhorn may be fierce, Sturgill’s name is too far flung at this point to influence any eventual outcomes in a material manner. It’s time to move on to the pursuit of the next Sturgill Simpson, to unearth the Karen Jonas’s, the Tami Neilson’s, the Spencer Cornett’s and Possessed by Paul James’s. Because artists who are struggling need support, but artists that are launched support themselves, and help support others.

At the same time, Sturgill Simpson may need some perspective too, and to understand he now has responsibilities beyond himself. The reason that Sturgill Simpson has awakened something special in so many listeners in 2014 is because people want to believe in something, in an artist that is like them, that they can relate to: independent-minded, respectful of the roots of the music, but that is actually successful, and is successful on his own name, from his own sweat and talent, and that holds a hope and promise for the future. Since so few among us are graced with the opportunity to live out the fantasy of becoming a music star, the rest of us tend to live this dream out vicariously through our musical heroes. That is why we cherish them so much, and celebrate their victories as victories of our own.

But independent country fans have been at this brink before, following artists that look like they could really bust out into something big, something beyond the humble independent musicscape, only then to witness their great vessel of hope seemingly train wreck the opportunity. These artists climb nine rungs up a ten rung ladder, and then for whatever reason, maybe because they’re afraid of success, maybe because they feel too foreign to what the public perceives them as, or maybe from some silly notion that self-destruction is noble or creative, they screw it all up, many times on purpose.

I’ve seen this happen so many times with these independent successes, you begin to wonder if it’s fate. Hank Williams III in 2008, when it felt like he was on the brink of turning country music inside out, Justin Townes Earle when he decided to destroy a dressing room in Indianapolis, Ryan Adams burning bridges and purposely offending people as a self-ingratiating medium for expression, and so on and so forth. For some of these artists, sobriety of the mind in one form or another comes too late, and that magical uplifting momentum leaves them in this middling ground, stalled out, mired in sameness and detached from their appetite; a shell of their previous creative self and relegated to bad self-impersonations affording mere glimmers of their previous creative brilliance.

Sturgill Simpson may think it’s selfish to want to be famous or successful in music, or that it’s an enterprise of the ego. But at this point, it would be selfish of Sturgill to not pursue whatever successes the music may bestow him. I’m not talking about the fame, money, or awards, but where all of these things lead. This thing is now bigger than Sturgill Simpson, or anyone. Who knows the forces at play that pick one among us out of the choir to sing solo, but they’re beyond our comprehensive capacities, and are best not to second guess.

Talent and relevancy the likes that Sturgill finds himself amidst are too rare to be flippant with. When they bestow you with grace, it is your duty to exploit them and see them to their bitter end, because for every man whose endowed with such opportunities, there’s 10,000 who wish they were. Not pursuing those opportunities, that is selfishness and egotism.

Sturgill Simpson’s next album will be the most important of his career. He’s reached the pinnacle of independent roots music, so now the question will be if he’ll plateau, or break through. Will he purposefully offend people simply to not allow himself to be wrongfully pigeon-holed, or will he boldly mine his own original creative expression, be damned if people are offended or not? Will he understand that country music is bigger than any one artist, and there’s a responsibility to the music we all as country music lovers must behold?

Things will not always be as rosy as they are for Sturgill Simpson right now. There will be setbacks, and missteps, and second guesses, because that’s the way of things. We are in the midst of the Sturgill Simpson glory days, and the only question is how long will this era last until it eventually dissipates, as all the great eras and artists in music invariably do.

But let’s not inadvertently stimulate an early onset of this sun-setting of an era by smothering Sturgill Simpson, either with our praise, attention, expectations, perceived obligations, selfish desires as fans, or shallow perceptions of him as a Waylon impersonator or leftist ideologue. It is our job as fans to support our favorite artists, even when they don’t deliver exactly up to expectations, or leave us in the lurch to refocus on life and family. Because at one point they touched us and brought us such joy and fulfillment that it changed our lives. And for Sturgill Simpson, that moment was two thousand and fourteen.