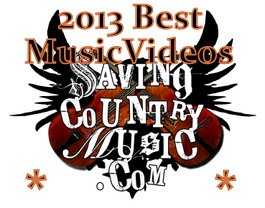 The modern-day music video is a really strange enterprise. Lots of money is spent by artists, and sometimes labels to produce something special; something that really represents the spirit of a song well. But when you look at what people watch, especially when it comes to independent musicians, many times it’s the fan video captured on a consumer-grade piece of technology that draws the most interest. Meanwhile mainstream music videos, especially from male stars, are the epicenter of country music’s decline.

It was just announced that CMT has picked up a whopping 7 new reality shows for their upcoming season. It looks like the era of quality music videos continues to be in decline. But there are still a few artists, and film/video makers out there committed to the art of music videos, and to doing it right.

Okay I’ll admit it, I wouldn’t like this video half as much if Kacey Musgraves didn’t look so good in blue hot pants.

In the aftermath of the massive mess and 73 arrests at the Kenny Chesney / Eric Church concert  June 22nd at Pittsburgh’s Heinz Field, resulting in shocking photos at the amount of litter left by fans, benstonium.com posted this hilarious parody of the crying Indian PSA. Don’t ask what a “Yinzer” is.

Caitlin Rose is one of the few artists that has a nose for the offbeat, engaging video. Last year’s “Piledriver Waltz” video was a standout as well.

“The video for ‘Only a Clown’ is executed with great vision by Michael Carter, resurrecting the VHS format for texture and capturing the thin line between fun and forlornness that accompanies the freedom of the 20-something existence.” (read full review)

What scripted videos usually lack is that ability to capture a magical moment in time where it all “clicks” and you get the shivers that only a live experience can afford. This two-song video from the Sun King Brewery has a few of them.

“Sturgill threatens to take the high-flying act international by boarding a puddle jumper and puttering over to the Land of the Rising Sun to record the video for his heart-pounding, hot plate, house on fire, country as hell, soon to be hit single ‘Railroad of Sin.’ ‘Godzillabilly’ is what’s he’s patterning the theme, as the Kentucky native and Nashville resident takes a high arching swan dive deep into culture shock.

Johnny Cash may have not been born in Nagasaki, and bullet trains may not be equipped with lonesome whistles, but the Orient is where Hank Jr. picked up his official nickname for Waylon Jennings: ‘Watashin!’ which means, ‘old #1’ and you’d be hard pressed to find a more modern resemblance to Waymore than one Sturgill Simpson. So keep clear of the closing doors, strap in tight, and get ready to speed away on Sturgill Simpson’s ‘Railroad of Sin.’” (read full review)

Capturing the true emotion and inspiration behind a song is what we all want from a video. Yet it so often becomes elusive by the superfluous additions in the production of a full-blown music video. Sometimes all you need is just the man and a guitar.

This video stimulated a little controversy when it was released in March. Is Eaglesmith being too harsh, too judgmental? Maybe, but it’s hard to argue that he made one hell of a video.

“When the prevailing image of Johnny Cash in culture is one of him flipping the bird, the argument can be made that it’s the wholesale reduction of a man of such towering accomplishments and time-tested faith. At some point the imagery and cult-of-celebrity of Johnny Cash trumped the man himself, and society lost sight of his greatest contribution: his noble and charitable spirit.” (read full review)

This video of Lindi’s Song of the Year Nominee “Tin Star” captures the spirit and theme of her emotionally-drenched foray into the realities that many independent-minded musicians face so well.

The point of any video is to get you to pay attention to an artist and their song. One of the problems with many videos is they take an artist’s song and try to interpret too literally, eroding the mystery from the song, robbing it of its ability to mean different things to different people. The video for “Deadman’s Blues” is quite literal, but done so well and with such heart, it bucks this trend. Though I put “I’ll Sing About Mine” a step ahead, it really is #1 and #1A with these two videos. They represent really listening to the songs and then interpreting their messages in the visual format.

“The best part about Josh Abbott’s “I’ll Sing About Mine” video is the faces of the people. I’ll guaran-damn-tee you all of these people are real folks from real places. What’s even better is these scenes they’re in are the same scenes you see in pop country videosthe back of pickup trucks, out on the farm, on a tractor or 4-wheeler, at a football game. But the scenes are 100% real. These people are so ragingly authentic and their faces tell such gripping stories, you want to take every single one of them and put them in your pocket so you can feel the honest, simple goodness in their souls all day long. If a picture is worth 1,000 words, then a face is worth a million.” (read full review)