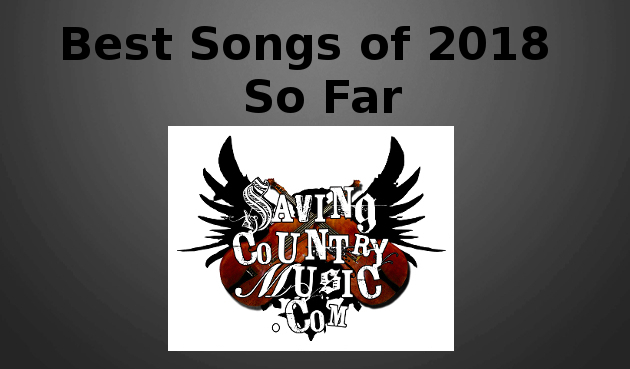 Overall 2018 has felt like a slightly down year for landmark tracks from where we were in 2017 and previous years. So for 2018 is a landmark year for albums, but the songs have some catching up to do. That’s no reflection on the six tracks selected below, which should be considered legitimate candidates for Song of the Year come December. But it does explain why there’s only six of them. These six songs are also admittedly sad bastard fare if there ever was any, but that’s the way it goes when you’re looking for songs that don’t just entertain, but fulfill, or illuminate something important in life most catchy tunes fall short of.

Unlike choosing the top albums from a given time period, choosing songs tends to be even more capricious and based on one’s own perspective. But please understand nothing was “forgotten,” and no song or artist should feel insulted by not being included here. This also isn’t an autocratic enterprise. You’re encouraged to share your own insights below about what has moved you in the first half of 2018.

Caitlyn Smith – “This Town Is Killing Me”

It’s an exercise in learning how to live with injustice to be a music fan in the modern context, and especially a country music fan. There isn’t a truly talented artist out there that is not burdened by an inequitable amount of obscurity to some degree, but nobody can make a grander case for the discrepancy between their talent and the level of their acclaim like Caitlyn Smith. With the hits she’s penned and the voice she possesses, she should be nothing short of a superstar, and instead she remains a creature of relative obscurity due to the oligarchical system in place on Music Row.

“This Town Is Killing Me” is about this very travesty, but like every great song, it rises to be about all of our struggles to attain our dreams amid insurmountable odds. And making this injustice that much more biting, this song has been streamed nearly 5 million times on Spotify alone. It is a massive hit just sitting there to be discovered, yet it is the farthest thing from the viewshed of radio or award shows.

Caitlyn Smith is the greatest undiscovered talent of our current era, and “This Town Is Killing Me” is her grandest achievement up to this point.

Kacey’s signature use of double entendre, which at other times has been rendered tired and trite through its prevalence in her music, is employed here in spectacular fashion. It’s then paired with superior, ethereal production, that may have hampered her latest record Golden Hour as a whole, but allows “Space Cowboy” to positively soar.

The heartache of being left behind is brilliantly captured here, along with the sincere aching in Musgraves’ voice to make “Space Cowboy” bigger than any year, album, or artist. In an ideal world, “Space Cowboy” is what modern country pop would be. It’s a stain, and an embarrassment on the country music industry that the powers that be have rendered this marvelous track simply a cut on a critically-acclaimed record for hipsters to enjoy instead of what America is listening to.

American Aquarium – “One Day At A Time”

What shakes us to our core in the greatest of songs is their ability to speak right to us in a way that seems to know who we are, and our whole life’s story with uncanny accuracy and understanding, ultimately allowing acute emotions to well up in even the most steeled of hearts. Even though “One Day At A Time” expends many of its verses talking shop of the life of a songwriter and musician, American Aquarium frontman BJ Barham makes us all feel his emotions like they’re our own. If not the best song so far in 2018, it very well might have the best line, “Songs fulfill a human need, to sit back and watch another man bleed, so for a moment we don’t have to feel sorry for ourselves.”

No other line better explains the importance of shining a spotlight on songs that can touch people’s lives like “One Day At Time.” With this song, BJ Barham announces his candidacy for inclusion with the very top songwriters of this generation.

Trixie Mattel – Red Side of the Moon

The majority of songs are about love in one capacity or another, with heartbreak and unrequited emotions being some of the most prevalent and popular sentiments. But there may have never been a song that encapsulates the feeling of love that will forever remain unfulfilled and unresolved as the version captured in Trixie Mattel’s “Red Side of the Moon.” It’s almost Shakespearean in its use of perspective and allegory, and Kristofferson-esque in its depth of story. Suffering from love that not only can’t be returned, but can’t be expressed isn’t just heartbreaking, it’s more common than many of us want to admit.

Brandon Jenkins is no longer with us, but his songs still remain resonating in the ears and hearts of listeners who knew what a titan of melody and verse this man was. “Fade To Black” needs no embellishment from the story behind Brandon’s heartbreaking passing after the diagnosis of a heart condition, and his eventual fading away on a surgery table. But the real-life circumstances swirling around this song certainly render it that much more poignant.

The story of “Fade To Black” is one of aging and coming to terms with one’s own demons. Resonant and powerful in its writing, it becomes even more compelling through the incredible use of composition—from the song’s hushed nature, to the cicada rising and falling in the background like the rhythms of life. It was never meant as an epitaph, but its power as one is undeniable, and just about perfect.

John Prine was one of the greatest songwriters dead or alive before he released his first record of original songs in 13 years in The Tree of Forgiveness. His wordsmithing is other-worldly, while remaining whimsical enough to feel effortless. “Summer’s End” does not wow you with some incredible turns of phrase or keen insight into life like so many Prine songs have done for decades. With this one, he envelops you in memory from his deft use of simplicity of story, and a timeless melody. John Prine and “Summer’s End” sound like your very fondest memory, as clear in the mind as it was in the minutes after the original moments passed.

• Vivian Leva – “Why Don’t You Introduce Me As Your Darlin'”

• Courtney Patton – “What It’s Like to Fly Alone (Hawk Song)”