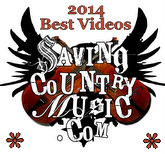 From crude videos taken on somebody’s phone, to full production videos with scripts and actors and sets, to animated shorts and everything in between, you never know what’s going to capture the imagination and become the perfect compliment to a song in the visual form. No question in the age of YouTube that there’s no dearth of material to oogle at, but what breaks through the crush of visual material to be called the best in 2014?

The Whiskey Shivers will probably never top the madness that is their video from 2011 for “Gimmie All Your Lovin’” that has now received over half a million views (still don’t know how the hell they made that), but their new video for “Free” off their self-titled album does its best to capture the band’s fun loving nature.

The fortuitous call was made when Don Williams went into the studio to record his Saving Country Music Album of the Year-nominated Reflections, to fit out the studio with a camera crew and release the videos intermittently afterwards. The result has been some really excellent moments captured on film, but none better than when Don Williams covered this Townes Van Zandt classic.

Yes, very silly, quirky, and maybe even hipster-ish, the video for sideman duo Steelism’s “Marfa Lights” still shows a lot of imagination and creativity in a unique approach. A fun watch.

Act appalled all you want, but it deserves to be here. A lot of heart went into this video.

5. Sturgill Simpson – “Turtles All The Way Down”

Despite what shallow listeners will tell you, Metamodern Sounds in Country Music is not a psychadelic record, but the video for “Turtles All The Way Down” certainly is.

Directed and edited by Graham Uhelski

Something that First Aid Kit has that virtually no other artist or band in the independent roots realm of a similar or bigger size can match is a library of videos that dazzle, entertain, and incite wonder like little else you can find. It’s an attention to video making as a creative medium in itself with no boundaries that gives their music an extra special love. The release of a new First Aid Kit video is grounds for an immediate stop down, and not just their tightly-woven and intricate big-production music videos with multiple scenes and settings that cast the duo in regal and awe-inducing moments, but with the sincerity and talent this sister duo from Sweden displays, even a short acoustic performance in a publishing office or a covered wayside is something that can enthrall and shuttle you off into a wormhole of escapism. After all, it was a simple video of the duo singing a Fleet Foxes cover that is given credit for launching their career.

Sometimes the best videos are live ones that capture and moment in time and the character of the artist so perfectly, a big production could never do it justice. When former Old Crow Medicine Show member Willie Watson performs his traditional folk tunes, he becomes so immersed in character, so stern-faced an honest to the song, it is truly something to behold.

Filmed for The Bluegrass Situation at Counterpoint Records in Franklin Village, Los Angeles.

Directed and recorded by Ben Guzman

The music, and both Ray Benson’s and Willie’s performances are chilling enough, but the video for “It Ain’t You” takes it a step further, fully understanding what’s at the heart of the song, and pulling out all the stops to not only do the song justice, but enhance the experience through the visual medium. The wisdom of knowing what the simple sight of Willie’s battle-worn hands can stir in the beholder, while crafting a way to capture the spirit of the long-time friendship between Ray and Willie so purely is worth watching even if the song itself doesn’t strike a particular chord with the listener. (read full review)

“It Ain’t You” was written by Waylon Jennings and Gary Nicholson.

By choosing animation for the “Willy Dear” video, it enhances the imaginative qualities already inherent in the song, and allows the story to unfold without the anachronistic limitations of a live video. The simplicity of the animation aids in this process, while the vibrancy still present in the color and the expansiveness of the landscapes emphasizes the wonder in the story itself.

The video also helps fill in some of the gaps in the narrative that the verses didn’t have the capacity to carry. And best of all, it illustrates that “Willie Dear” is not really about Willie Thompson, his love Lizzy, or the tragedy that befell them because of mistaken circumstances. It is about old abandoned houses, and the stories they tell. (read full review)