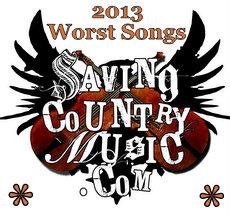 So here you go ladies and gentlemen, the worst of the worst that 2013 had to offer in country music. As you might suspect, a list of mainstream country’s worst misdeeds in 2013 is mostly populated by an ear-serrating cacophony of country rap songs. With only a couple of exceptions, country rap has replaced what last year at this time was a parade of laundry list-themed songs.

2013 SCM Song of the Year Nominees

PLEASE NOTE: To qualify for this list, the song had to be released as a single. And with such a crowded field, only the worst of the worst were selected. Feel free to share your most vilified songs of 2013 below.

When I originally ranted about this song in February, I called it the worst country song ever. If I only knew what the rest of 2013 would have in store.

Do I understand the levity and the long history of country music that must be considered to declare “1994”³ the worst country song that has ever been released? Yes, yes I do. And yet I still stand firmly behind that opinion.” (read full rant)

What can make a bad song worse is when it becomes so ubiquitous throughout society that it pursues you like a bad nightmare—playing at the grocery store, blaring out of the car next to you at a red light. “Cruise” was officially released in 2012, but since this was the year it achieved historical success as the longest-running #1 in the history of the country genre (though that record when you look deeper into the numbers is somewhat spurious), it would only be fair to include 2013’s summer anthem here.

“Originating from the Republic Nashville imprint of Big Machine Records, the duo consisting of Tyler Hubbard and Brian Kelley met while attending the Mike Curb College of Music at Nashville’s private and exclusive Belmont University. I know, right? Doesn’t get more country than that! Apparently they were both enrolled in the “How To Be A Upper Middle Class Douchebag But Pretend To Be A Country Boy And Filch Rednecks Out Of Their Hard Earned Money, 101”³ class. They made eyes across the classroom, and afterwards discussed their mutual desire for world music domination over $175 haircuts, manscaping, and colonics. Next thing you know, Florida Georgia Line is born.

“The Decider’s” offering to the 2013 resurgence of the country rap trend.

“Blake Shelton’s “Boys ‘Round Here” is songwriting by algorithm and analytics, fashioning together words and sounds known to have the widest impact on mainstream radio’s weak-of-mind demo. The “boys” in the title of “Boys ‘Round Here” is fitting, because this song is rank immaturity. It’s the audio equivalent of sneaking out of your mom’s house to smoke pot behind a Pizza Hut.” (read full review)

Yes, this actually exists, was even released as a single with an accompanying video.

“This isn’t a cry for relevancy folks, this is a blood-curdling scream; a banshee yawp from the innermost depths of holy hell, destined to beset the eardrums of all rationally-minded music listeners with a cursed memory so potent and terrible, it will be well-documented as a clinically-certified precursor to the most acute and debilitating onset of post traumatic stress disorder, terrorizing the very sanity of any semi-intelligent human.

“If a truly good country song is represented by a delicate pair of supple female breasts, then Montgomery Gentry’s “Titty’s Beer” would be a rack of cellulose-addled man boobs replete with coarse and graying disheveled chest hair, pock marked with skin Cancer and bisected by a grizzly double bypass scar. Originally recorded by the Country Music Grimmace Colt Ford, “Titty’s Beer” is an ode to idiocracy and a battle hymn for the forces of misogynistic cultural reduction. The premise doesn’t even make sense, but you can see some oaf going, “Well hell. I like titties, and I like beer, so”¦.” (read full rant)

“Did you feel that Oklahoma? That was the earth tremor caused by your native son Joe Diffie selling out so violently it measured 2.1 on the Richter scale. The mulleted, cop mustached 90”²s semi-star has released an “answer” song to what many consider the worst song in country music history, Jason Aldean’s country rap “1994,” and it is as embarrassing as puberty.

“The beats for “Girl Ridin’ Shotgun” sound like they were composed by a 7th grader who just snorted his ADD meds, just like all of the beats of the Jawga Boyz’s bombastic and trashy tracks. The beat doesn’t even get five seconds into the song without going off meter. There’s biscuit crumbs in Joe Diffie’s mustache that could compose a better beat. And then D Thrash’s first line doesn’t even rhyme. Are you effing serious with this song? “Girl Ridin’ Shotgun” makes me want to make out with my cousin and bet on a dog fight.” (read full rant)

“Tyler Farr’s “Redneck Crazy” isn’t for jilted male lovers looking for solace, it is for socially awkward, introverted, creepy-ass chronic masturbaters that hold a minor in megalomania. This song doesn’t need a rant, it needs a restraining order and ankle bracelet. It’s an insult to both the terms “redneck” and “crazy.” True rednecks ride their problems out, rub their wounds in the dirt and move on, not whine about them like a panty waist, eliciting threats and enlisting their loser friends to enact adolescent acts of vandalism as some sort of self-righteous recompense.”

“About the only thing this song is good for is turning in for state’s evidence of why Tyler Farr shouldn’t be allowed within 200 yards of his ex’s or any elementary school.” (read full rant)

Outmatched only by Florida Georgia Line’s “Cruise” for the longest-charting single in 2013.

“Let’s start this off by dispatching with the 700 lb gorilla in the room and say what everyone is thinking, but few are willing to say publicly: The only reason Luke Bryan’s “That’s My Kind Of Night” is a #1 song is because bored suburban moms and their daughters want to fuck him. Luke Bryan’s music has the nutritional value of notebook paper, and is the clinical result of when an entertainer spreads his arms wide in a submissive pose and relents his entire will to the country music industrial complex, saying “Do your worst.” Luke Bryan has no soul. He is more machine than man. He has the integrity of a Guatemalan mule bridge with a squadron of M1 tanks trying to cross it. “That’s My Kind of Night” is like a diabolically-specialized form of audio diarrhea that marries the ideal ratio of water to solids so when it is sent through an industrial fan it inflicts the widest collateral damage on as many people as possible.

“A little Conway a little T-Pain?” Yep, that pretty much sums up American music in 2013, sans the Conway replaced by Luke Bryan and his vomit-inducing country rap trend-chasing ilk.” (read full rant)

Jerrod Niemann – “Drink To That All Night”

Listening to this song is as traumatic as waking up naked in a stranger’s bed, with pacifiers and spent glowsticks littering the sheets around you, other people’s bodily fluids encrusting on your bare skin of your midriff, your eyebrows shaved, and the unsettled sense like you spent the night before indulging in designer drugs and weird sex against your will. Yes ladies and gentlemen, in 2013, country music when there—to the techno-rave glitterdance sounds of Jerrod Niemann and his woman’s ball cap that he got on clearance from Ross.

When the words kick in to this awful, awful song, you think it must be some sort of Saturday Night Live parody. But no, this song is a serious single from Jerrod. Luckily it skidded off the charts pretty rapidly, but “Drink To That All Night” symbolizes another new low for country music in 2013, with an excruciatingly-boring video.