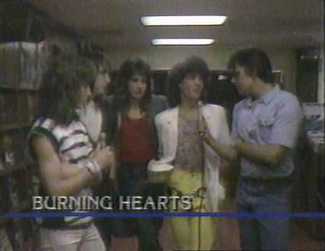 We recently learned though the announcement of glam rock band Mötley Crüe’s farewell tour that the band had signed a deal to release a Mötley Crüe country music tribute album with Scott Borchetta, the big cheese at Big Machine Records—home of Taylor Swift, Florida Georgia Line and other such ilk—and affectionately known around these parts as the Country Music Anti-Christ. In the announcement, Scott Borchetta revealed that he was a “not-so-secret” fan of Mötley Crüe, saying, “Our album will highlight just how great the Mötley Crüe song catalog is.”

For folks who know some of the history of Scott Borchetta, this profession of love for The Crüe may have come as no shock. Scott Borchetta grew up in the Los Angeles area where Mötley Crüe is from, and was around the LA area playing in his own hair metal bands about the time Mötley Crüe was getting big. Borchetta’s father was in the music business too, and in the early 80’s a young Borchetta dropped out of school and moved to Nashville to be closer to his father.

While in Nashville, Borchetta helped form a band called Burning Hearts. Complete with rototoms, screaming eagle guitar solos, and spandex and leather pants, the Burning Hearts epitomized everything 80’s bad bubblegum glam metal hairspray rock. “Sherry’s Eyes” was their big “hit” that could be found on a local radio station compilation at the time, as the band slummed around Nashville playing to half-empty venues and milking Scott’s father for studio time. Of course Borchetta’s Burning Hearts never really took off and he eventually gave up his headbanging gigs for the family business.

A young Scott Borchetta clad in canary yellow pants, Colombian cocaine white blazer ala Miami Vice’s Don Johnson, and hugged by a super bitchin’ handcuff belt, can be seen below hogging all the face time for the Burning Hearts even though he’s just the bass player, in a cable access TV program.

Watching the guy who would eventually become the most powerful man in country music shill for his 80’s glam metal project, it’s not hard to see why so much of country music today is saddled with bad rock guitar solos, worst taste, phony glitz, and rock star attitude.

Mötley Crüe, eat your heart out.

Thanks to SCM commenter “MH” for the tip on this video.