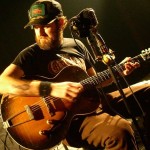 The “Dirty Old One Man Band” from Austin, TX Scott H. Biram has a new album entitled “Bad Ingredients” slated to come out in October. Biram, who is currently on tour through the Midwest (see dates), relayed the new album info in a recent interview with Awaiting the Flood:

“Bad Ingredients” is the name of the next album. I finished it a few weeks ago and it will be released sometime around the first week of October, 2011.”

Biram talked about many things, including his mix of country, blues, and rock influences, and how his legendary tussle with an 18-wheeler helped his career.

“(Laughs) Well you know it shook me up there for awhile, and every day I am thankful for being alive. You know, it crosses my mind pretty often. It definitely helped my career a little bit by giving me some kind of back-story, but, at the same time, I’m always having to tell people, “Look I play music. I didn’t just get hit by an 18 wheeler.”

Recently Biram released never-seen before video footage of the wreck (not for the faint of heart):