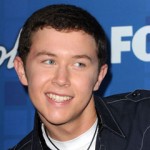 You know, it’s not very becoming to gloat. But sometimes you just can’t help it, like after you’ve been attacked by a mob of very angry (and curiously, very Asian) Scotty McCreery fans who told me that their beloved American Idol alum Scotty would NEVER lip sync, as I asserted he did on The CMA Awards a couple of weeks back. Among other things, I was accused of lying to to bring myself web traffic, and was told that McCreery’s father was “upset” by my article, and that it was “hurtful.” Someday people will learn to trust the eagle eye of the lovable, huggable Triggerman, as well as the keen ear that, among other things, pointed out that Taylor Swift had issues of singing on key way before it was popular to say so.

But honestly, I feel sorry for all the Scotty fans who are now being forced to eat their words after he so egregiously lip synced his performance at the Macy’s Thanksgiving Day Parade this morning, on this most grateful of holidays, that now the transgression is undeniable. They gave him their heart and trust, and now he’s let them down. Scotty was clearly caught off guard as the music started, seconds behind syncing up with the recorded track.

I found it most curious that after his CMA performance, not one clear tape of it could be found anywhere on the internet, unlike so many of the other performances. Well now the transgression is “Clear As Day” (name of his album, huh? Get it ?!? Ha!), and as I said before, in light of another scandal where another reality show contestant was found to be lip syncing, it calls into question the legitimacy of all of these talent show franchises.