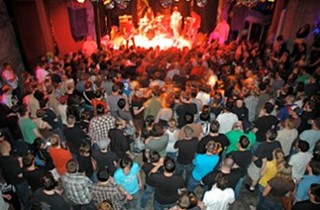 Friday was the first day of an underground roots gathering called the Moonrunners Festival at Reggie’s Music Joint on State Street in Chicago, and the festivities were marred when a security guard working the door at the event was stabbed in the lower left abdomen outside of the club.

“About 9:15 PM last night, security at Reggie’s Rock Club approached several bums on a street near the club,” Officer Sullivan of the Chicago Police Department told Saving Country Music early Saturday. “A physical altercation ensued, and the victim was stabbed. One person is in custody.”

Questions remain whether the transients had been drawn to the club because of the event, or were there incidentally. Some witness accounts say they were “gutterpunks” that could have been drawn to the Moonrunners Festival, and would normally not be loitering in that portion of Chicago. “They were loitering on the corner, not even on our property. They were on 21st and State Street, down the block there. They had been there all day,” says Jason from Reggie’s.

Why security from the club would engage the transients if they were not on the club’s property, and what the extent of the transient’s injuries are and if he will be charged with a crime have yet to be determined.