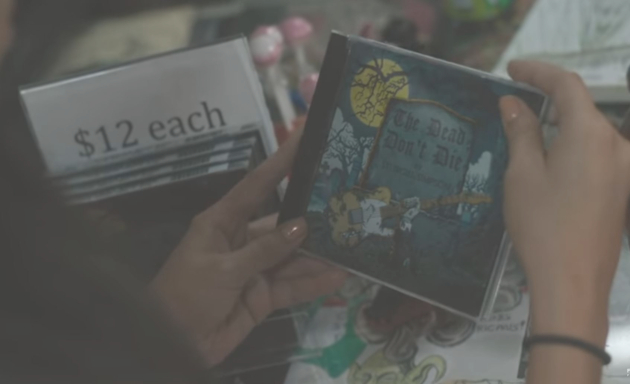 If you want to voluntarily succumb to some culture shock and the strange clashing of two worlds, then try on for size pop star Selena Gomez buying a Sturgill Simpson CD from a local store amid an impending zombie invasion. What’s this all about? The scenario comes from the twisted mind of director Jim Jarmusch, whose latest film incarnation is characterized as an “American zombie comedy” that boasts an all-star ensemble cast including Bill Murray, Adam Driver, Steve Buscemi, Tom Waits, Danny Glover, Caleb Landry Jones, Rosie Perez, Iggy Pop, the aforementioned Selena Gomez, and many others.

The new Jim Jarmusch movie is set to be released to theaters on June 14th. The plot is said to revolve around a small, peaceful town that is suddenly terrorized when zombies rise from their graves. The town’s small police force and a Scottish mortician in drag makeup try to save the town. Yeah, doesn’t sound especially thought-provoking, but it might be good for a hoot.

But what you’re all really wondering is, what Sturgill Simpson CD does Selena Gomez buy? Did she go with the obvious choice of the Gammy-winning A Sailor’s Guide to Earth which turned Sturgill Simpson into a household name after he was nominated for Album of the Year right beside Beyonce, Drake, Adele, and former Selena Gomez boyfriend Justin Bieber? Did she kick it old school and go with his debut High Top Mountain, or maybe his cosmic country magum opus, Metamodern Sounds in Country Music?

Nope, instead it’s an album called The Dead Don’t Die, which the movie gets its name from. Don’t worry, there’s not some dark, Gothic Stugill Simpson record that has escaped your grasp all these many years. The album is most likely fictitious, though Sturgill did record a song called “The Dead Don’t Die” which apparently punctuates the final scene of the movie. Sturgill Simpson also appears briefly in the film, but is not part of the main cast.

The Dead Don’t Die is Sturgill Simpson’s latest dalliance with film and acting. He also starred in the CBS All Access series “One Dollar.” The on-demand series was a mystery set in a small rust belt town in post-recession America where a one-dollar bill changing hands connects a group of characters involved in a multiple murder. It debuted via CBS All Access on August 30th, 2018. He also played a small role in the independent movie Orca Park from 2011, and also plays a role in an upcoming film called Queen & Slim.

Now that Sturgill Simpson acolyte Tyler Childers has recently announced a new album, expect an announcement forthcoming about Sturgill’s latest release soon. Unfortunately, those hoping for a zombie resurrection of Simpson’s first record with the band Sunday Valley, there’s no news to report on that front at the moment.