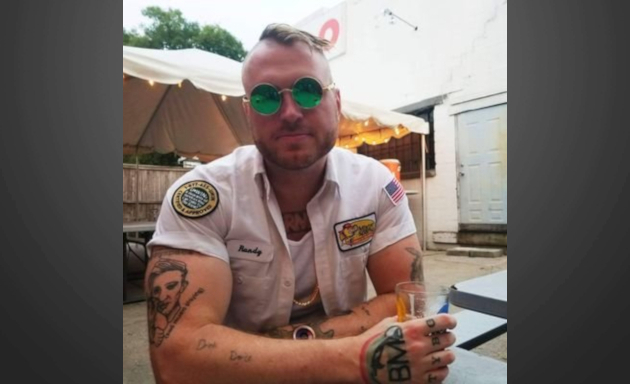 Shane Morris—the former Sony music employee who became a national media celebrity and Twitter star after supposedly exposing the systemic racism in country music—has just exposed himself as a pathological liar. After launching his latest viral Twitter thread that was retweeted over 68,000 times, he has admitted that it was all a fabrication. Subsequently, his Twitter account has been either been deleted or was shut down by the the social network Saturday morning (5-25).

On May 20th, Shane Morris posted a story to Twitter about buying a van for a road trip from Los Angeles to Seattle. After buying the van, he supposedly found a brick of heroin taped under the hood. Morris later claimed he sold the van back to the original owner who wanted the van for the drugs, but replaced the heroin with a John Grisham novel. Morris then claims that the van owner turned out to be a member of drug gang MS-13 and threatened to kill him, only for the gang member to be sentenced to life without parole after raping and murdering a teenager before he could avenge the theft. In the elaborate Twitter thread, Morris posted multiple pictures of a van and scenes from a road trip Morris actually made with some friends up the West Coast, making the story feel that much more believable.

In the days after launching the viral Twitter thread, multiple media outlets reported on the incident as a true story, Morris claimed he was contacted to potentially make a movie about his experience, and his followers on Twitter shot from 17,500 to 31,700. Even after the story had been exposed, the original thread continued to go viral, and was still pinned on Morris’s Twitter account. But of course, just like Shane Morris’s claims of being a country music insider and bearing witness to rampant racism throughout the genre, his latest story was all a lie.

In a lengthy confession and apology posted to Medium, Shane Morris said, “The story you just read about two guys finding a kilo of heroin on an epic road trip, selling it, and then one of the protagonists going back a year later to sell the van and a fake kilo of heroin to a drug dealer? It’s a lie. I made the whole thing up.”

Morris goes on to explain how the van and road trip were real, but he fabricated the story after posting another tale about taking mushrooms that also went viral, and he “wanted to see if I could tell an even more outlandish story. I did it because I wanted to showcase my writing abilities, and get attention … I guess by putting myself into the story, I thought people would think I was cool. Everyone wants to be a celebrity, with a blue check mark, and a gazillion people commenting on your Instagram. When my post blew up, I thought I might reach that.”

Shane Morris claims the reason he chose to come clean is because he’s in fear for his life after telling a story about stealing a kilo of heroin from MS-13. “In retrospect, that’s probably the dumbest thing you can write and put on the internet.” Morris says that after talking to his marijuana dealer, he was convinced to immediately leave his house and that he should be in fear for his life. He started a Go Fund Me page to help pay for his supposed life on the run from MS-13, and to make a movie about his experience. The crowdfunding drive has since been removed.

Though Morris directly apologized for lying, he doesn’t seem to have learned completely from the incident. As he expressed in the Medium post, “I’m going to keep writing, and this time around, I’m going to clearly label it ‘fiction’ when I do. No one gets mad at you, as long as you make sure to label your words a work of fiction … That’s who I am. I’m just an opportunistic asshole with a brilliant imagination.”

Shane Morris was most certainly being an “opportunistic asshole with a brilliant imagination” when he launched the viral Twitter thread about racism in country music, which included numerous falsehoods about country music’s history and Morris’s own fabricated experiences. In the thread, he called Billboard “racist as fuck,” claimed he  witnessed rampant racism while in the country music industry, and that not a single black artist had made it to the top of the country charts between 1964 and 2008—an easily verified falsehood. Charley Pride alone topped the Billboard Hot Country Songs chart during that period 29 times.

Unfortunately, this serial liar and social media huckster has yet to come clean when it comes to his country music thread like he did with the MS-13 story. As Saving Country Music reported back on April 12th in the article “Lil Nas X, The Media Echo Chamber, and Shane Morris’s Vile Past,” the Shane Morris Twitter thread on country music was cited, quoted, and linked to by dozens of media outlets, including major media properties such as The New York Times, The Guardian, NPR, Vulture, HuffPost, and others.

Furthermore, The New York Times and writer Ben Sisario embellished Shane Morris’s stature in the country music industry, falsely claiming he was a “former country music executive” in an article posted on April 5th. Morris was never an executive-level employee of a record label, he was a non managerial employee of Sony for a brief period, Saving Country Music confirmed with Sony in April. The Guardian also made the claim of Shane Morris being a former “label executive” in an April 2nd article, while NPR’s Sam Sanders interviewed Morris for their nationally-broadcast Morning Edition program based off of his viral claims against country music.

Saving Country Music and others have reached out to these media entities about the false reporting, and despite the clear evidence of Shane Morris fabricating everything about his story, they refuse to offer corrections or retractions. Just this week, Saving Country Music posted an update in regards to The New York Times and Ben Sisario refusing to even acknowledge the issue, while posting a new article praising themselves for their thoroughness and vetting sources found on Twitter. Even in light of the latest revelations by Shane Morris himself, no corrections have been issued by any of the media entities that reported on the story.

The latest scandal involving Shane Morris has now been reported on by New York Magazine in an article entitled “When It Comes To Viral Twitter, Trust But Verify,” as well as by Boing Boing, The Daily Beast, and others. Ironically, The Daily Beast was also one of dozens of periodicals that linked to and quoted Shane Morris’s fabricated country music Twitter thread in April, but have yet to offer a retraction or clarification on their original story.

And Shane Morris’s fabricated stories in viral Twitter threads may not be his most alarming activity. As Saving Country Music reported on April 12th, Shane Morris is a very well-documented and aggressively-vile Twitter troll who’s been accused of making death threats towards young girls, has been cataloged verbally attacking the children of music performers, along with making homophobic jokes, and jokes about AIDS, genocide, Nazis, 9/11, and Holocaust, along with other troubling activity verified and cataloged online over many years. In May of 2013 after Shane Morris sent out an especially vile barrage of tweets threatening violence against fans of Fall Out Boy, and verbally abused the children of lead singer Patrick Stump and bassist Pete Wentz, SPIN and others reported on the incident. Numerous screenshots of some of Shane Morris’s most disturbing activity can be found below.

But perhaps even more troubling is how Shane Morris is exposing how the media and Twitter are allowing fabricated information to go viral, and most alarming, how this is affecting public perception and the reporting of the media specifically. Shane Morris’s viral Twitter thread on racism permeating the country music industry was one of the primary drivers of Lil Nas X’s popularity and the favoritism he found in media reporting. Not a single media entity out of the dozens who cited Shane Morris in their Lil Nas X stories—including legacy outlets such as The New York Times, NPR, and The Guardian—checked Morris’s background, or questioned his story. Instead they emboldened him by giving him a platform, which led to his latest ruse. Meanwhile when Saving Country Music questioned Shane Morris’s assertions, exposed his falsehoods, and highlighted his history of troubling behavior online, the reporting was met with accusations of racism.

The handling of Shane Morris by dozens of media outlets is a scandal-level issue, and multiple reporters and editors should be reprimanded or fired for their continued refusal to revise the record on this dangerous individual with a long history of lying, manipulating the media, and using threatening and incendiary language. New protocols should be put in place at top level periodicals to make sure similar levels of malfeasance are not allowed to occur in the future.

Shane Morris’s twitter thread on Lil Nas X is one of the reasons “Old Town Road” became such a sympathetic story for the public and the media, but Shane Morris’s own revelations also help expose the media’s confirmation bias, and the challenge of media and the public moving forward where unverified facts regularly make it into people’s social media feeds, and unfortunately, into the copy of some of the largest and most respected media entities in the world.

EDITORS NOTE: Due to the history of Shane Morris deleting tweets, and coercing others to delete them, screenshots of the tweets have presented to make a permanent record in the interest of public safety. Many of the below tweets are still active on Twitter, and can be found via search. This is just a selection of the many Tweets Saving Country Music discovered. 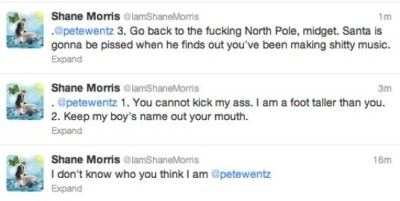 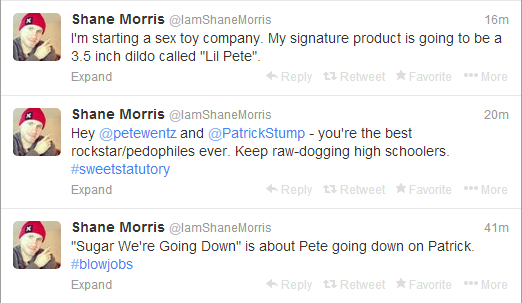 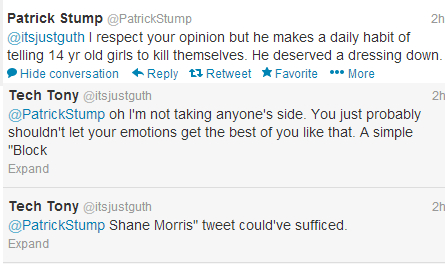