The holidays are a joyous time for many, and for others it’s the time of year when familial strains are brought most to the forefront. David Allan Coe may be about the last person you would think of as a family man, but the history with his family is a lot more complex than one might imagine, and it’s something he’s addressed intimately in his music over the years to the tune of inspiring some of his best work. His children can attest to the complexity of David Allan Coe the family man, including, if not especially, the children who’ve chosen to follow in his footsteps by entering the business of making music.

It has been a tumultuous few years for David Allan Coe, even by David Allan Coe standards. He was married to Kimberly Hastings in April 17th, 2010—a backup singer he’d been dating for a decade. Then in March of 2013, Coe was involved in a serious car accident in Ocala, Florida. Coe had to be cut out of the car and experienced cracked ribs and bruised kidneys, and spent multiple days in a Florida hospital.

In the aftermath of the accident, some family relationships became even further strained with Coe, including with his son and guitar player Tyler Mahan Coe, who has since spoken publicly how the incident was used by others to push him farther away from his father. Then it was revealed in September of this year that David Allan Coe has plead guilty to one count of impeding and obstructing the due administration of the internal revenue laws. Coe is waiting to be sentenced, and could face up to three years in prison. He also owes the IRS nearly half a million dollars in back taxes. 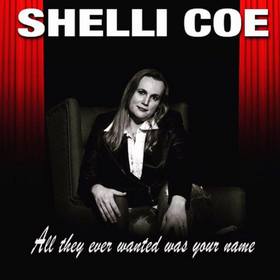 All of this is the backdrop for David Allan Coe’s daughter releasing the song “All They Ever Wanted Was Your Name” as a new single. The Austin-based singer-songwriter has put together a respected body of work that like all daughters and sons of country music celebrities, seems to always be both hiding in the shadows and invariably compared to their parent’s efforts when it should be considered on its own merit. Though the new song is said to have been written around 10 years ago as an open letter to her father, Shelli Coe insists that the real heart of the song is something we can all relate to.

“‘All They Ever Wanted Was Your Name’ was written about a celebrity who falls in love with someone who does not have their best interests at heart, who can’t wait for them to get out of the way so that they can take over and be the celebrity,” says Shelli. “I used a real life experience to create the song, but honestly, the song could be about anyone who falls in love with someone who is not good for them. And everyone sees this and they try to warn them, but they’re just not listening because they’re in love, and love is blind.”

One of the things that is compelling about “All They Ever Wanted Was Your Name” is how despite being an angry song on the surface, Shelli resolves the anger she might have with the individual who’s gone blind, understanding that it’s not from hate, but from love where the blindness is emanating. There’s also a message of hope that perhaps that blindness will recede over time, while the heart of the song still shows concern for her loved one. Another nuanced element of the song is how Shelli slyly incorporates a portion of the chorus of one of her father’s signature songs, “You Never Even Called Me By My Name,” into the chorus of this new effort.

“This song was very hard for me to write because I love my friends and my family very much, and I don’t want to see them getting taken advantage of,” she says. “I’ve had a lot of people come up to me after shows and tell me how that song personally spoke to them. So I’m happy I was able to write it in a universal way to allow everyone to relate to it.”

Beyond the story of someone being taken advantage of, “All They Ever Wanted Was Your Name” teaches an understanding that part of love is patience and being willing to weather rough patches, to look beyond selfish perspectives to understand and accept the things one can’t control, and to be willing to be the bigger person and continue to show love, sometimes even when it’s not responded to or reciprocated, or is even misinterpreted. Because in the end, the love never dies—an especially important message to hear this time of year.

Purchase “All They Ever Wanted Was Your Name” on iTunes

All They Ever Wanted Was Your Name, David Allan Coe, Shelli Coe, Tyler Mahan Coe