Sheryl Crow: “Country Is More Pop Than Pop Was When I Came Up” 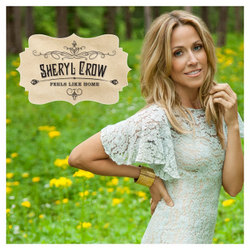 When country music purists characterize pop’s intrusion into country as a recent phenomenon, they jeopardize undercutting their entire argument. Pop has always been a part of country, and asserting otherwise is a misrepresentation of history. But when pop country apologists use this same argument to say there’s no reason to be alarmed of how pop the country format has become, they aren’t taking into consideration the reduction of quality in pop over the years, or the degree in which pop has impinged on the roots of country as a per capita measure of the entire genre.

Enter Sheryl Crow, who after years of flirting with country is finally taking the big “gone country” plunge and is making a marathon tour of country radio stations ahead of releasing her first official “country” album Feels Like Home on September 10th. Sheryl—who credits Brad Paisley for finally convincing her to go country—didn’t have to augment her sound much to make the move to the country format, because as much of her pop and rock music has always been somewhat rootsy, country music has veered much more in a pop direction, allowing the two styles to virtually intersect.

“The country format is more pop than pop was when I came up two decades ago,” Sheryl explained to Reuters late last week when being interviewed about her new album, illustrating the degree of country’s move to pop in recent years. Of course Sheryl isn’t saying anything that some country fans haven’t been clamoring about for years, but as someone looking to make their way in the mainstream country world, Sheryl Crow’s perspective and honesty speaks to the degree of change in country music.

When pop or rock artists “go country,” their initial albums tend to be a tinge more country than many of their established pop country counterparts as they attempt to prove their muster in the genre. A similar observation could be made of Darius Rucker when he made the country move. Nothing Sheryl Crow or Darius Rucker have done in country so far can compare in pop caliber to Taylor Swift’s dub step-inspired “I Knew You Were Trouble” or Blake Shelton’s country rap “Boys ‘Round Here” for example. As time goes on, pop artists may not even need to declare their country allegiance to move to the genre, they may simply stand still and be involuntarily engulfed by the ever-present shift of country towards pop, and become country by proxy. Sheryl Crow may be the first example of this phenomenon.