Correct me if I’m wrong, but I don’t remember Hank Williams ever recording any drunken sea shantys. I can’t remember any Ol’ Hank songs featuring trumpets, or classically-styled lilting mandolin parts either. And I guess the Hank song that is built around incongruent, sloppily-overdubbed harmonies is on that $70 Hank Time-Life box set I could never get the scratch together to buy. I also don’t remember any Hank Williams songs sucking ass, but somehow, Sheryl Crow has figured out how to pull all these disparate qualities together to make the musical equivalent of a rusty knife abortion in an open field behind a filling station. 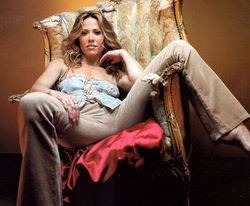 I admit, it may be a little unfair to pick on arguably the worst song on this Lost Notebook of Hank Williams project, certainly it all gets better from here, but at the same time, taking into consideration the sensitivity and importance of the project material, it is only as strong as it’s weakest link. And Sheryl Crow’s rendition, or version, or co-write, or whatever you want to call it of Hank Sr.’s unfinished song “Angel Mine” is the realization of all the fears the critics of this project had. And now, every time someone wants to go and hear the original of this song, they’ll pull up this overproduced, droning mess.

…chosen for their songwriting and arranging abilities and their affinity for delivering songs reminiscent of Hank’s earthy directness.

What they should have said was…

…chosen for their songwriting and arranging abilities and their affinity for delivering songs reminiscent of Hank’s earthy directness… and Sheryl Crow.

Seriously, what a lazy, default pick. It’s not that every time a group of artist is put together in a project, Sheryl Crow is involved, it’s that EVERY FRIKKIN TIME A GROUP OF ARTISTS IS PUT TOGETHER SHERYL CROW IS INVOLVED!!! I mean what makes her so special, that she’s a pop star that can actually spell her name and stay out of rehab?

I know, I know, she’s had her moments. I remember one time seeing her on The Grammy’s or something in the early oughts and she was playing bass and I thought, “Wow, Sheryl Crow is a real musician!” But that is addition by subtraction. Most of our pop stars are so awful and talentless, when one can actually demonstrate average competency, we act impressed. Sorry, but touring with Kid Rock and banging Lance Armstrong are not formidable enough resume points in my book to earn the right to be on this project.

The Lost Notebooks of Hank Williams is getting very mixed reviews from customers. Sony ATV would probably like to characterize the opposition to this as isolated amongst scumbag Hank3 fans. I think there are plenty of questions about this project before you get to the one that asks why Hank3 was not involved, but hearing this song drives home the point that they probably could have found more competent folks to handle the task, if it should have been tackled at all.

I would love to review the whole album, but until we’re given an explanation about what happened in the 4 years these songs were sitting on a shelf, where Willie Nelson’s song went, why we were lied to about the timing, and many other concerns, my recommendation will continue to be to ignore this project. And if you need another reason to ignore it . . .