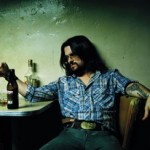 On August 17th, Shooter Jennings fired a shot across the bow of Music Row and the “new Outlaw” country movement by releasing the song “Outlaw You” on CMT. Now with the help of long-time independent country music filmmaker Blake Judd of JuddFilms, Shooter has released a more fleshed out, viral-style video for the song. It was released today, once again with the help of CMT.

“Shooter called me about using a photo I took in New York while shooting the EPK for is upcoming album ‘Family Man'”, filmmaker Blake Judd explains. “Of course I was all for it, and soon after he sent me the first ‘Outlaw You’ video and wanted to see if I was interested in doing another video in Nashville last minute. So Jacob Ennis and I loaded up, drove to Nashville, and picked him up from the airport. We set up camp at Bob’s Idle Hour on Music Row, did a couple run throughs in the heat, shot a one-take viral-feeling video, and then hung out back at Bob’s until his plane went out that afternoon. Some friends came out like Joshua Black Wilkins, Joey Allcorn, Young Struggle, and Justin Wells of Fifth on the Floor.”

Judd Films has produced videos and EPK’s for names such as Hank3, Scott H. Biram, Joe Buck,  Lucky Tubb, Wayne “The Train” Hancock, as well as work with JD Wilkes of Th’ Legendary Shack Shakers on his film Seven Signs, and is currently in the final stages of a film on Charlie Louvin called Still Rattling The Devil’s Cage co-directed by Keith Neltner, featuring George Jones, Emmylou Harris, Emmylou Harris, and Marty Stuart among others.

“I like ‘Outlaw You’ a lot. It’s relevant right now from all aspects. This video, done in one take, on music row, all accomplish what Shooter was trying to do and say with this campaign. Think about it, this is a one-take, low budget video that’s going to be in heavy rotation on CMT. That is an accomplishment right there. Shooter’s album ‘Family Man’ is a dark, beautifully written, personal, pure country record that I truly believe is going to blow people away.”

A concern some had when “Outlaw You” was first released was that the song sounded similar to the music Shooter was criticizing. This was Shooter’s response to Saving Country Music:

“My intention was to put a little irony into it. I was hearing a lot of what happens on the radio and how it sounds. Radio mostly is very far from anything I would ever listen to, but for this song, I felt it was important to put it in a language that Nashville could understand. Sometimes to get a message across to another culture, you gotta speak in the culture’s native tongue. Without taking myself or my music too seriously, or crossing into cheeseball overproduced territory, it was meant to be a reply to what they’re doing there and I didn’t think a “retro” or “old school” type sound would even make it 5 feet here. It needed to have that upbeat and catchy element I think for it to have any impact.”

Leave a Reply to Paul In Kentucky Cancel reply