Shotgun Willie, & Guns As Part of the American Experience 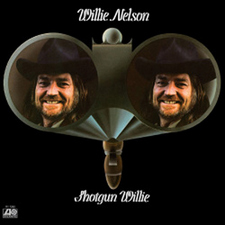 Willie Nelson has come to be known as one of our generation’s greatest pacifists and men of wisdom. Beyond his contributions in country music, his unique American story from growing up in the Depression, to attaining superstardom, to his unique perspective on life and championing of worthy causes, Willie Nelson will go down as one of America’s most noble men.

But Willie was not always the gentle, grandfatherly type that we know today. He grew up in a rough time and place. His music career started out on the rough streets of Ft. Worth, where bands had to play behind chicken wire to protect them from flying bottles and knife fights. His long-time drummer and manager Paul English was hired because he was a street gangster and could make stingy club owners pay up. Willie also served in the Air Force, and taught Sunday School, and sold encyclopedias door to door.

Willie’s life has run the full gamut of the American experience. That’s why we love him and give him a pass even when we may not agree with some of the things he says or does. Or at least most of us do. Some country fans got sideways with Willie a while back when he made some statements about gun control, saying, “I think a lot of guns, there’s no need for civilians to own those. Those are for military.” But before those fans jump to conclusions that Willie is some limp-wristed softy that has no respect for the 2nd Amendment, maybe they should look back at a couple of incidents in his past.

It was in the aftermath of an incident that would later be remembered as the “Great Ridgetop Shootout” that Willie Nelson got the nickname “Shotgun Willie.” Ridgetop was the house Willie lived in just outside of Nashville in the late 60’s. When it burned down in 1970, it stimulated Willie’s move back to Texas. In 1969, Willie and his first wife Shirley separated, and his second wife Connie moved into Ridgetop. Willie and Shirley had three children, and right before Christmas in 1969, Willie’s youngest daughter Susie told Willie that his oldest daughter Lana was being physically assaulted by her husband Steve Warren. 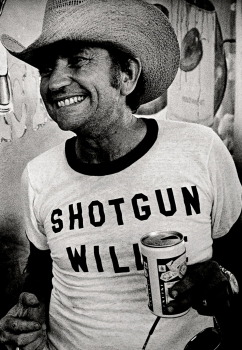 “I ran for my truck and drove to the place where Steve and Lana lived and slapped Steve around,” Willie recalls. “He really pissed me off. I told him if he ever laid a hand on Lana again, I would come back and drown his ass. No sooner did I get back to Ridgetop than here came Steve in his car, shooting at the house with a .22 rifle. I was standing in the door of the barn and a bullet tore up the wood two feet from my head. I grabbed an M-1 rifle and shot at Steve’s car. Steve made one pass and took off.”

But this wasn’t where the incident ended. Willie drove back to Steve and Lana’s to confront Steve again, but he was gone and had kidnapped their young son Nelson Ray. Lana also told Willie that Steve was looking to “get rid of him (Willie) as his top priority.” So what did Willie do? He drove back to Ridgetop and waited for him.

“Thinking Steve would come to Ridgetop to pick me off about dusk, I hid in the truck so he couldn’t tell if I was home. We laid a trap for him. I had my M-1 and a shotgun. He drove by the house, and I ran out the garage door. Steve saw me and took off. That’s when I shot his car and shot out his tire. Steve called the cops on me. Instead of explaining the whole damn mess, the beatings and the semi-kidnapping and shooting and all, I told the officers he must have run over the bullet. The police didn’t want to get involved in hillbilly family fights. They wrote down what I told them on their report and took off.”

Gun Battle at the Birmingham Coliseum

As time went on, Willie Nelson mellowed, but didn’t stray too far from his gun-toting past. After playing a concert in Birmingham, Alabama in the late 70’s, Willie and the band found themselves in the middle of a gun battle in a six-story parking garage as they were unloading gear from the stage. Though the story is centered around guns, it also illustrated Willie’s budding status as a peacemaker. 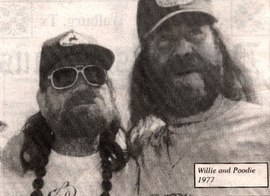 “All of a sudden we hear ‘Kaboom! Kaboom!'” Willie’s long-time stage manager “Poodie” Locke recalls. “It’s the sound of a .357 magnum going off in the parking garage. The echoes sound like howitzer shells exploding. It’s kind of semi-dark, and this guy comes blowing through this parking deck…now here comes this bitch with a fucking pistol. ‘Kaboom!’ She’s chasing this motherfucker. It sounds like a fucking war.”

At the time, Willie Nelson and most of his band and road crew carried pistols as a matter of habit. The scene became chaotic as the shooting happened right as the crowd from the show was filing out into the parking garage.

“People are piling out of the show and they start scattering,” Poodie continues. “Here come the cops from every direction. They’re flying out of their cars, hitting the parking deck, spread-eagling the whole crowd–‘On the deck, motherfuckers!’–because the cops don’t know who is shooting at who…All these cops are squatting down in the doorjambs, turning people over, frisking them, aiming guns at everybody, just waiting for the next shot to be fired.”

“And here comes Willie. He walks off the bus wearing cutoffs and tennis shoes, and he’s got two huge Colt .45 revolvers stuck in his waist. The barrels are so long they stick out the bottom of his cutoffs. Two shining motherfucking pistols in plain sight of a bunch of cops nervous as shit. Willie just walks over and says, ‘What’s the trouble?’ Well he’s got some kind of aura to him that just cools everything out. The cops put up their guns, the people climb off the concrete, and pretty soon Willie is signing autographs.”

Quotes from Willie: An Autobiography