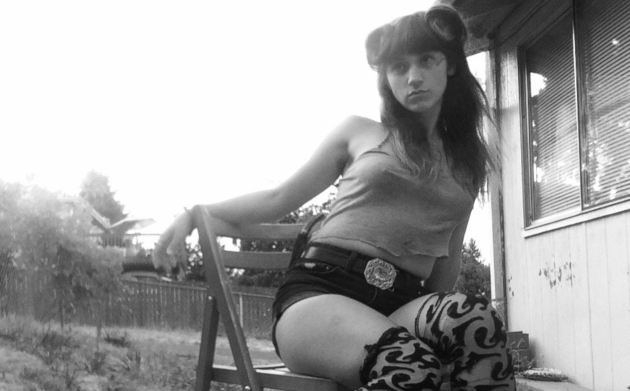 As some of you may or may not know, summers at Saving Country Music are spent on the West Coast avoiding the heat in Texas and scouting for talent that the mother brains of country music located in Nashville and Texas regularly overlook. This year a good haul of new names were thrown on the radar from watching them perform at festivals and such, but perhaps the most valuable name was handed over via a smart phone and a video presented under the inquiry, “Have you ever heard of Sierra Ferrell?”

In a video from GemsOnVHS that now has well north of 1 million views (see below), Sierra Ferrell immediately reveals herself as one of those one-in-a-million country music voices that instantly compels you regardless of what is being sung. A native of West Virginia, Ferrell first began making music when she was a child, and packed up her guitar at age 20 and hit the road. Since then, she’s been criss-crossing the country and sharing her unique style of honky tonk country, blues, with a little bit of jazz mixed in that audiences are both immediately familiar with, but crave as the music they’ve been missing their whole lives.

When it was announced Wednesday (8-21) morning that this undiscovered gem had signed to Rounder Records, it was both a shock, and made perfect sense. “I’m pickled pink, and it’s a big dill,” says Ferrell about the news. “All the folks I’ve met at Rounder are kind, supportive, and enthusiastic about my gain to their roster. I’ve been writing a lot. Let’s make some music.”

As you can seen from her statement, Sierra doesn’t just have talent, she has a spunk and personality that has gotten lost in a lot of “Americana” music. Along with Rounder Records, Sierra has also signed with the Paradigm Talent Agency (Sturgill Simpson, Margo Price, Tyler Childers, et al) for booking, and with Dolphus Ramseur (The Avett Brothers, Carolina Chocolate Drops) for management. This means Sierra doesn’t just have herself a new record deal, she has a top notch team behind her to push her to the top.

“Sierra Ferrell’s voice encompasses West Virginia,” says Dolph Ramseur. “When she sings, it’s impossible not to listen and envision the beautiful mountains and luscious valleys of that wild and wonderful state. Listen closely and you’ll hear the roaring rivers and haunting hollers of wild creatures and timeless characters. If you are within earshot of Sierra, her singing commands and dares you to listen.”

Keith Levy at the Paradigm Talent Agency adds, “We were blown away by Sierra from the moment we met her—her once-in-a-generation voice, but also the feeling that when you are with her, truly anything can happen. We are super excited to be working with Sierra. It will be a wild ride!”

There are artists to watch out for, and then there are artists who everything seems to align for on their way to making music the right way. Sierra Ferrell fits in that latter category. Expect a new record arriving some time in 2020.