Singing What You Live: Hard Language in Country Music

There’s never been a question in anyone’s mind if Johnny Cash actually shot a man in Reno just to watch him die. But that lyric, and Johnny’s song “Folsom Prison Blues” have gone on to become an iconic piece of country music history. This language was nothing new in 1955. Murder ballads and gunslinger tales trace back to the very roots of country music and America’s Gothic, violent identity.

Stretching the boundaries of lyrical content was something at the very foundation of the early Outlaw movement in country music. As has been pointed out many times before about American culture, violence is perfectly acceptable, but sex can be taboo. Nobody batted an eyelash at “Folsom Prison Blues”, but when the original Outlaw Bobby Bare recorded Tompall Glaser’s “Streets of Baltimore” with it’s fairly docile and veiled reference to a man leaving his wife, it caused a controversy.

Kris Kristofferson pushed the limit for drug references with his song “Sunday Morning Coming Down.” Johnny Cash later cut the song himself, and despite the “stoned” lyric, the song went on to be the CMA’s Song of the Year in 1970. The boundaries are continuously being pushed in country, until now in many respects country has lost most of its family friendly identity. 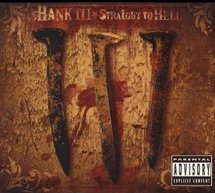 In underground country, racy lyrics have been at the very foundation of the movement, though in no way are they required. Hank Williams III’s Straight to Hell album was the first to ever be released under the CMA with a Parental Advisory, but the salty content is many times misunderstood as being autobiographical, or condoning the behavior being sung about. Sometimes it is, but sometimes, just like with “Folsom Prison Blues” it is telling a story with the real language and themes people face in modern day life.

“There’s just a little misconception…” Hank3 told IBWIP on their 5th Anniversary episode. “All the Williams’ have had a rowdy crowd, whether its Hank Sr., Jr., or myself. Most of my songs have been, you know I’ve lived a lot of them. And once in a while I’ll kind of put myself in other people’s shoes. Like the song “#5″ was some friends of mine that have been hung up on some really hard stuff, you know with the heroin and stuff like that. I just put some hopeful songs out there. Once in a while I’ll put out a little bit of a fantasy out there like the dedicated song to GG (Allin). Those kind of songs I haven’t done anything like some of the topics that hit on that song. I can just project, or put myself in that mode for a little bit.”

“One of the reasons I sing about smoking and drinking and all that stuff so much is because I try to create a partyin’, good time atmosphere when people come to see me. I’m not trying to bring them down, I’m trying to lift them up so they can forget about all their problems and all the stuff that’s happening in the world. And for two or three hours, they can come out to a show and just have some fun. And I always try to tell folks to pace it out as much as possible.”

When reviewing Bob Wayne’s recent album, the topic came up in a heated debate Bob Wayne participated in personally. “…So you’re telling me DAC (David Allan Coe) killed a women in TN then broke out of jail… I think a lot of his songs a true man”¦ But I think he is also a storyteller,” Bob replied to critics. Bob Wayne regularly sings about drinking and drugs while in real life remaining completely sober, just like many underground country artists with racy lyrics like Joe Buck Yourself and Lonesome Wyatt.

It is hard to fault country music fans who do not want to see foul language or hard themes in a genre so tied to traditional values. Just like any genre of music, this is the reason well-defined lines are important so people can steer clear of content they may find offensive. But it is also unfair to fault artists carrying on the same storytelling traditions Johnny Cash and Hank Williams did while modernizing the language no different than how it’s being modernized in the mainstream of country. It’s also unfair to say singing songs you haven’t lived somehow makes them invalid. Street cred, dues, skin’s on the wall, or however you want to phrase it will always be important in country music, but the should never be essential to telling a story.

Hard language presents a challenge to underground country and its aging demographic. Most underground country fans are now in their 30’s. When Hank3’s Straight to Hell came out they were in their 20’s, and could relate better to many of the racy themes. Now, like many of the artists themselves, the fans have grown up, taken real jobs, have kids and spouses, sobered up possibly, and sometimes the hard language songs can come across as immature or hard to relate to.

Barring something similar to the Middle East’s Islamic Revolution, the trend will always arch towards the breaking down of moral barriers to artistic content in culture. With this freedom comes a responsibility to make sure people are only presented with questionable content when they want to be. Instead of looking at other people’s tastes and judging them, maybe we should feel fortunate we live in a time when censorship is lax and people can enjoy the music they find appropriate and appealing without it being run through a filter of other people’s opinions, tastes, or views.

And let’s all hope that the country music themes of morality vs. sin, good vs. evil, sober vs. imbibing, and law vs. the outlaw remain eternal in country music until kingdom come, because this eternal struggle is what we all face every day, and the reason country music speaks to us like nothing else.