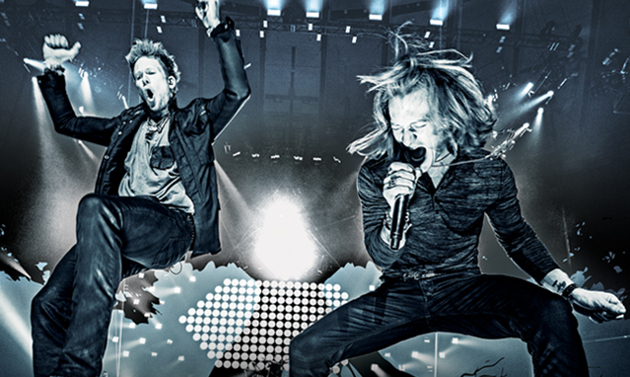 I think I liked Florida Georgia Line more when their music was worse. Now they’re writing songs about getting married and hanging out with their parents, yet still with much of the same manic, douchebag production and stupid rapping vocals of before, and the entire enterprise just comes off like a sad whimper from a band sensing their demise in the offing and trying to cash whatever checks they may have left before it all comes crumbling down.

On the duo’s third album Dig Your Roots, Florida Georgia Line puts out incredible effort to answer all of the criticisms against them as a country music act. They try to include more songs of substance. They try to include more country instrumentation. They even give the Silent Bob of the duo—the blonde, short-haired Brian Kelley—a chance to sing lead on multiple songs. And the results are awful. Real awful. This is because all the criticisms of the duo not being country enough, not being substantive enough, and having a virtual mime in the group to make them eligible for unchallenged “duo” distinctions come awards show season, were just surface observations of what is ultimately a band that has little to nothing and never did. There’s no dressing up this dog.

Florida Georgia Line got dead on lucky with “Cruise,” and hey, give that song credit for being in the right place at the right time, and resonating with an incredibly wide audience and ushering in an entirely new era in country music. Regardless of how acrimonious the topic of Bro-Country is, you can’t argue that it didn’t have impact. And their song “Dirt,” hey, it was good. But chalk that up to the blind squirrel finding a nut theory, because especially after listening to this new album, it’s clear that was a dumb luck anomaly.

You could almost sell Dig Your Roots as a concept record. That is how hard and heavy Florida Georgia Line go at taking about marriage, life, having kids, settling down, and spending time with loves ones while they’re still around. It’s incredible how many songs on this record delve into these subjects. You want to give Florida Georgia Line at least credit for trying. You really do. It’s like during the early years of elementary where you grade a student on effort, even if their competency and proficiency are poor. But ultimately, the songs are just not good, and are saddled with not just busy and ill-advised overproduction, but the smarmy feel that this is Florida Georgia Line you’re listening to. Even if the material is more mature, which it only is on the surface, it’s just not what you listen to music for. 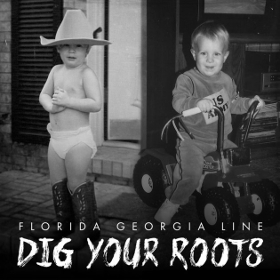 And betwixt these songs about getting married and wanting to have babies and grand babies with their wives are these interludes where the old school Florida Georgia Line shows up in full force ostensibly rapping about date rape in the cab of a pickup. Somehow, even this late in the game, the song “Good Girl, Bad Boy” figures out how to break the world record for cramming the most countryisms into a lyrical phrase of a checklist Bro-Country song.

“Big block, cruisin’ up the black top, Turnin’ the corn row, scare crow, farm house, gravel road.” And what does any of this have to do with the premise of the song? Jack nothing. It’s pure window dressing and sygnifiers to let shallow listeners know it’s a country song because you sure as hell wouldn’t deduce this from the sound of it. Similarly, “Summerland” and their song with Ziggy Marley “Life Is A Honeymoon” are total fluff escapism with no nutritional value, while being a bit too busy and disjointed to even call them catchy. “May We All” with Tim McGraw is one of the few songs that does have a catchy factor, but it still offers little to no substance.

And you think we’ve got it bad having to choose between a psychopathic power-hungry maniac, and a corrupt sea hag hosebeast for President? Well imagine a scenario where we elect both. Together. In one big shit sandwich that we’ve all must spend the next four years taking big healthy bites from. That’s basically the malignant puss-oozing ruptured brain tumor of a song you get when you marry Florida Georgia Line—the most acrid, commode-circling swill ever conceived in the history of country music—with the apex douchebags of the embarrassing boy band phenomenon known as the Backstreet Boys, rubbing uglies together to make a mutated hellspawn audio baby to be birthed backwards into your poor supple ear canal in the form of the song “God, Your Mama, and Me.”

But these acidic selections don’t make up the lion’s share of the Dig Your Roots material. This is reserved for songs like the direly boring adult contemporary of “H.O.L.Y.,” the feeble attempt at committed romance in “Lifer,” or the antithesis of everything Florida Georgia Line fans listen to this duo for, “Grow Old.”

See, this is the ultimate failing of Dig Your Roots. Florida Georgia Line should have told its critics to kiss off and continued to make stupid party music. Tyler Hubbard and Brian Kelley aren’t much good for anything, but they’re decent at that. You have the aging Dierks Bentley and Keith Urban out there trying to act like their 22 again, singing about hooking up in hot urban clubs, and meanwhile Florida Georgia Line is singing about how they can’t wait for their baby’s babies to turn 18.

Florida Georgia Line’s fans don’t want to think about that stuff. That’s all deep and shit. Sure, ultimately if you’re listening to Florida Georgia Line now, you’ll more than likely end up living the most mainstream of mainstream boring life in the vast bloated middle of whitewashed America. But for now you want to party, and marriage and paternity tests are big, scary things getting in the way of your wasted 20’s.

Since Florida Georgia Line is virtually incapable of writing or performing a truly deep song, they record a song like “Music Is Healing” that is about deep songs (without being one itself) and hope this suffices for the “substance” all these mean critics keep talking about.

The Brian Kelley sung “While He’s Still Around” ends up being the best song on the record, and by golly it has its moments (“Smooth” is also kind of fun in a guilty pleasure sort of way). But there is a reason Brian Kelley has been buried in this band for two full records. It’s not that Brian Kelley can’t sing, meaning he doesn’t have the ability to open his mouth and make audible sounds to music. It’s just that his voice has absolutely nothing distinct about it whatsoever. Yet a lot of singers without distinct voices have done fine in music—if they have the songs to back it up. Brian Kelley doesn’t though, and you can tell that the production team is incredibly self-concise about Brian’s voice so they throw such extremely heavy digital processing on top of it to hopefully keep mainstream listeners engaged, if only from the computerized, Tron-like quality of his Auto-tuned and Vulcanized vocal track contains. 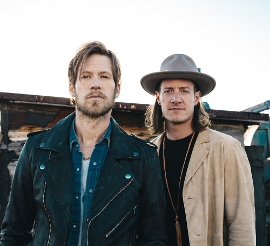 Perhaps Brian Kelley lobbied for the extra attention on this record. Maybe he wants to polish up his resume just in case the ultimate demise of this FGL project truly is in the offing and he hasn’t sung lead on even one single album cut until now. My working theory on Brian Kelley is still that someday in the future he will lambast Florida Georgia Line’s entire output and say it was all pure pandering. He may not be the singer of the group, but something tells you he’s the thinker. He still has no business trying to carry a song—“While He’s Still Around” notwithstanding.

But even “While He’s Still Around” is sappy, mawkish, James Taylor-like boring bullshit that is not going to woo critics, and will get core FGL fans looking at the duo sideways. Go ahead, read some of the online reviews of this record in numerous places, and you will find many instances of folks turning coats because Florida Georgia Line left so much of the party atmosphere behind, and Brian Kelley sucks at singing leads.

Producer Joey Moi knew Florida Georgia Line had to go in a new direction and instill some meaning into their music because he saw what a laughing stock his last pet project Nickelback became. And again, trying to give credit where credit is due, both Tyler Hubbard and Brian Kelley are married now. They’re both seriously thinking about settling down, having kids, spending more time with loved ones, and actually enjoying some of the wealth they’ve accrued by soiling America with their trashy music. There was never any reason to doubt the honesty of Florida Georgia Line when they were rapping about “Stick the pink umbrella in your drink,” and there’s no reason to doubt their honesty about wanting to settle down now. But only a few extreme instances in their career arc has the music been anywhere close to even mildly good.

So now they’re sort of ventured into no man’s land where the critics are still not going to give them any serious love—it’s too late for that—and their lyrics are alienating many of their shallow fans. Sales for Dig Your Roots so far are down, and the singles feel forced. There’s still some tread on these tires, if for no other reason than Florida Georgia Line is a massive music franchise, and certain investments still need to be repaid. On the surface, they are still a successful band, but public bellyaching over the objectionable, anti-Christian nature of “H.O.L.Y.,” and the ridiculous anti-cop controversy in July 2016—both of which don’t hold water, but nonetheless have been bad PR—are beginning to erode the core out of their fan base.

Begrudgingly, Florida Georgia Line does deserve an ‘A’ for effort on Dig Your Roots. They did try to move forward. But ultimately the effort was not enough. They failed. And not just from a critic’s standpoint, but from the standpoint of this critical juncture of a band that was once the biggest thing in country, yet is now trying to navigate through the post Bro-Country reality, of which there really is none for a band like Florida Georgia Line.

Leave a Reply to Roland of Gilead Cancel reply